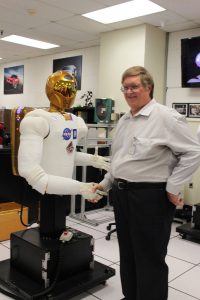 John W. Alred began his career with NASA and the Johnson Space Center as a summer intern and later joined the Center after graduation, performing engineering analyses for the Space Shuttle and early Space Station development studies. He led cross-agency studies of planetary surface architectures and systems for human exploration of the Moon and Mars in his early years.

Dr. John Alred culminated his career as the Branch Chief for Astromaterials Research. He led scientists performing planetary material analysis, process simulation, and robotic mission surface science to evaluate new directions for research and set a path for future science in the Artemis Program — a perfect capstone for his career. John also served on the Astromaterials Research and Exploration Science (ARES) core leadership team providing Division level expertise and research strategies. Before being named Branch Chief in 2020, John was the Lead of the Non-Metallic Materials Team in the Materials and Processes Branch of the Structural Engineering Division. He has served as the Deputy Manager for Space Environments and as the Deputy Manager for ISS Materials and Processes at the Johnson Space Center.

Before his stellar career with NASA, Dr. Alred served as visiting professor at Texas A&M University in the Aerospace, Mechanical, and Nuclear Engineering Departments and an Adjunct Professor at the University of Houston Mechanical Engineering Department and the University of Houston’s Sasakawa Institute for Space Architecture. He continued his passion for research by applying his expertise and experience serving in a variety of aerospace industry positions on robotic and human spacecraft, performing as the lead engineer responsible for the Stardust Discovery Mission launch vehicle interface and meteoroid protection design, leading the Boeing ISS Plasma Team, and providing external contamination verification of U.S.-produced International Space Station hardware.

Prior to teaching and mentoring at universities, Dr. Alred served as the Director of the NASA Advanced Design Program at Universities Space Research Association (USRA) and managed 44 universities, ensuring engineering capstone design courses were related to active NASA programs and initiatives. At the conclusion of this program, he became the Director of Advanced Programs at Eagle Engineering, where he led Lunar/Mars studies and assorted advanced mission planning activities for NASA and aerospace industry customers.