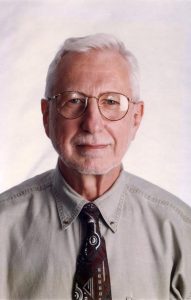 Dasch was born in Dallas, Texas, on July 9, 1932. He graduated from North Dallas High School, and then earned geology degrees from Sul Ross State University in Alpine, Texas (B.S.), The University of Texas at Austin (M.A.), and Yale University (M.S., Ph.D.).

After a Fulbright Postdoctoral Fellowship at the Australian National University in Canberra, he taught geology and geochemistry at Oregon State University in Corvallis, Oregon. At Oregon State he was widely known for his highly popular class, “Rocks and Stars,” designed for students not studying scientific or technical subjects. Enrollment was limited by the size of the largest auditorium on campus to 748 students.

From Oregon State he moved to NASA, working first at the Johnson Space Center, and later at NASA Headquarters where he managed the National Space Grant Program and the NASA Experimental Program to Stimulate Competitive Research. He was also a visiting scientist at the Lunar and Planetary Institute. His 150 research papers and abstracts were primarily in isotope geochemistry, and he was honored to have worked on analysis of rocks from the Apollo 14 and 17 missions.

Dasch served as chairman of the Geological Society of America (Cordilleran Section), president of the Oregon Academy of Science, and was a recipient of the Burlington Northern Faculty Achievement Award. He received the International Astronautical Federation Frank J. Malina Medal for Space Education, the National Science Foundation/Department of the Navy Antarctic Service Medal, the NASA Exceptional Achievement Medal, and the National Space Grant Distinguished Service Award.

Dasch undertook research in Australia, Greenland, Antarctica, the Solomon Islands, Europe, Asia, Canada, and Mexico, as well as the U.S. He served on the 1993 Antarctic Search for Meteorites team, which recovered more than 800 meteorites, including the then-10th known lunar meteorite.

After his retirement from NASA in 2002, Dasch returned to Alpine, where he taught introductory geology at Sul Ross for several years. He continued to advise students, attend student thesis defenses, and give brief talks to the Geology Club until shortly before his death.

— Text courtesy of the Alpine Avalanche