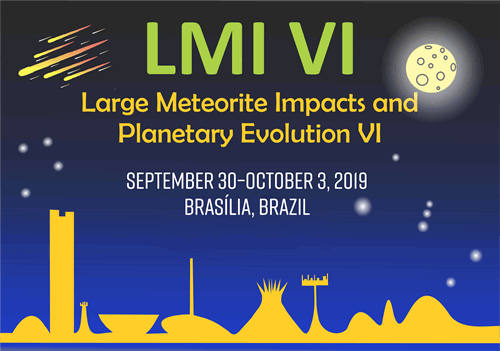 The sixth Large Meteorite Impacts and Planetary Evolution Conference (LMI VI) was held from September 30 to October 3, 2019, at the FINATEC (Fundação De Empreendimentos Científicos E Tecnológicos) on the University of Brasília (UnB) campus in Brasilia. The event attracted 90 participants from 21 countries. The LMI conference series arose out of the Workshop on Cryptoexplosions and Catastrophes in the Geological Record held in Parys (Vredefort Dome) in 1987, with the first two LMI meetings held in Sudbury in 1992 and 1997, followed by Nördlingen (Ries Crater) in 2003, the Vredefort Dome in 2008, and Sudbury in 2013. LMI VI is the first dedicated impact cratering meeting ever hosted in South America.

In a departure from previous meeting formats, two workshops were held prior to the start of the conference proper. Twenty-eight additional presentations were delivered at these workshops. Ludovic Ferrière and Michael Poelchau hosted the 1.5-day workshop for 17 participants on “Recognition of Impact Structures and Ejecta Layers on Earth – Shock Metamorphism in Rocks and Minerals.” Presentations ranged from introductory shock physics to reviews of impact-diagnostic criteria, and new research results related to identification of impact structures, crater fields, and ejecta layers, as well as practical sessions covering microscopy of shock phenomena and PDF indexing. The one-day “Electron Backscatter Diffraction (EBSD) and Geochronology” workshop, organized by Aaron Cavosie, Erin Walton, Timmons Erickson, and Gavin Kenny, updated 17 participants on state-of-the-art EBSD applications to zircon and a range of other accessory minerals that hold great promise as additional criteria for confirmation of shock metamorphism and as shock barometers. In addition, data relating to different dating techniques (LA-ICP-MS, SIMS, and ID-TIMS) for accessory minerals were compared.

The program of the main conference commenced on September 30. A total of 70 oral and 51 poster presentations were made, with special sessions on The Chicxulub Impact Event and the K-Pg Boundary, Shock Wave/Material Interactions, Distal Impact Ejecta, and Impact Cratering on Lunar and Planetary Bodies, besides more general themes such as Cratering Processes, Complex Impact Structures, Large Impacts and the Evolution of Life, Impactites, and Impact Melts. The more relaxed 20-minute oral time slots provided ample opportunity for further interactions, which continued into the tea and lunch breaks, as well as well-organized evening functions. More than 30 presentations have been promised for a conference proceedings volume that is likely to take the form of a GSA Special Paper.

Following the conference, from October 4–8, 27 participants joined the Araguainha Dome excursion in central-western Brazil, which was led by Natalia Hauser; Elder Yokoyama led 13 participants through the Vista Alegre and Vargeão impact structures in southern Brazil. Despite threats of heavy thunderstorms, particularly kind weather allowed the Araguainha group to complete two lengthy hikes through the central uplift of South America’s largest impact structure, in which regional stratigraphy and the wide variety of Araguainha impactites, including several types of impact-formed melt breccias, were examined. Hauser was ably assisted by Uwe Reimold and Ph.D. student Carolinna Souza Maia. Additional contributors to the field guide included Alvaro Crósta, Marcos Vasconcelos, and Ana Rita Maciel. The Vargeão and Vista Alegre structures afforded participants excellent opportunities to observe and discuss the formation of shatter cones, and examine monomict and polymict breccias and pseudotachylitic breccias formed in the Serra Geral basalt and its sedimentary footwall, with extensive discussion of these features as analogs for lunar and martian targets. The field guide was co-compiled by Alvaro Crósta.

Considering that 17 researchers and postgraduate students from Brazil attended the workshops and conference, and judging from the discussion held during the conference and excursions, LMI VI is likely to prove to be a significant catalyst for future impact research on the continent, with several new international collaborations already in progress.

The conference also provided an opportunity for a plenary discussion on the future of the terrestrial impact database. The conference (1) approved that a formal approach be made to The Meteoritical Society by the organizing committee of the conference to explain the current situation and request guidance and support for planned efforts to revise the database, and (2) nominated a task group to review the existing state of the terrestrial database and propose changes to be considered at the 2020 LPSC and MetSoc meetings.

Financial support for the conference was provided by the Barringer Crater Company, The Institute of Geosciences at UnB, the University of Brasília, the CAPES foundation of Brasil, the IRD (Institut de Recherche pour le Développement, France), the FINATEC Foundation at the University of Brasília, and The Meteoritical Society. The Barringer Crater Company, The Meteoritical Society, and the IRD provided significant sponsorships that — combined — allowed 21 travel grants to be offered to postgraduate students and early career researchers. Philippe Claeys (Chair), Lidia Pittarello, Steven Jared, and Lutz Hecht formed the travel award committee, which was also supported by David Baratoux on behalf of the IRD.

In conclusion, the organizing committee would like to use this opportunity to express sincere thanks to all organizations and individuals who contributed to the success of LMI VI and, therefore, the future of impact cratering studies, in general, and in South America, in particular. For more information about the program and abstracts, visit the conference website at https://www.hou.usra.edu/meetings/lmi2019/. 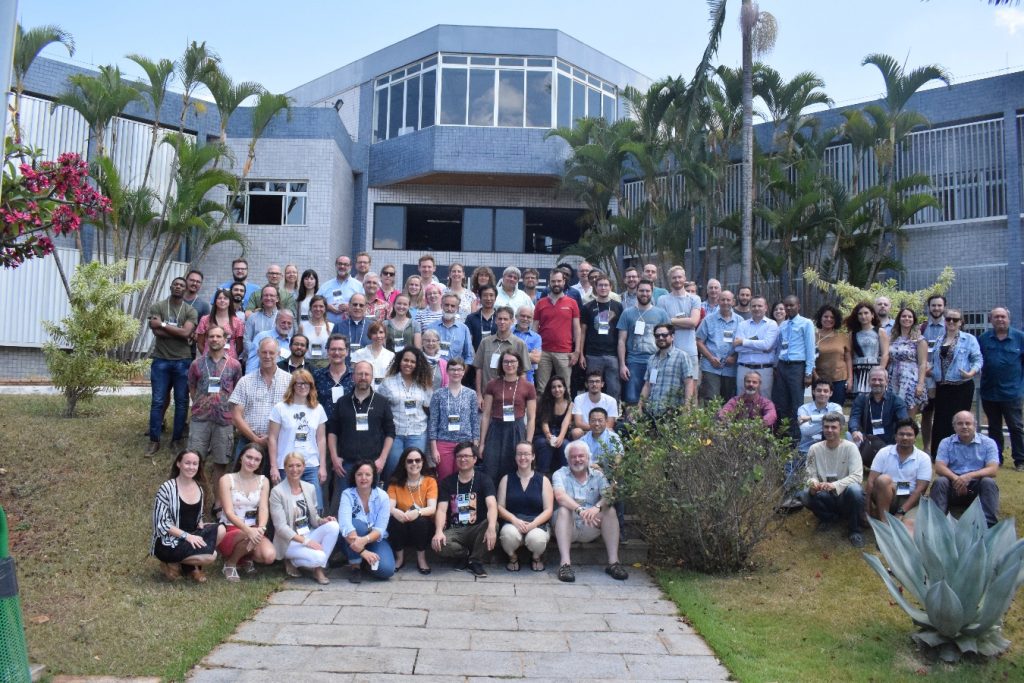 The conference group photograph taken in front of the FINATEC conference venue. 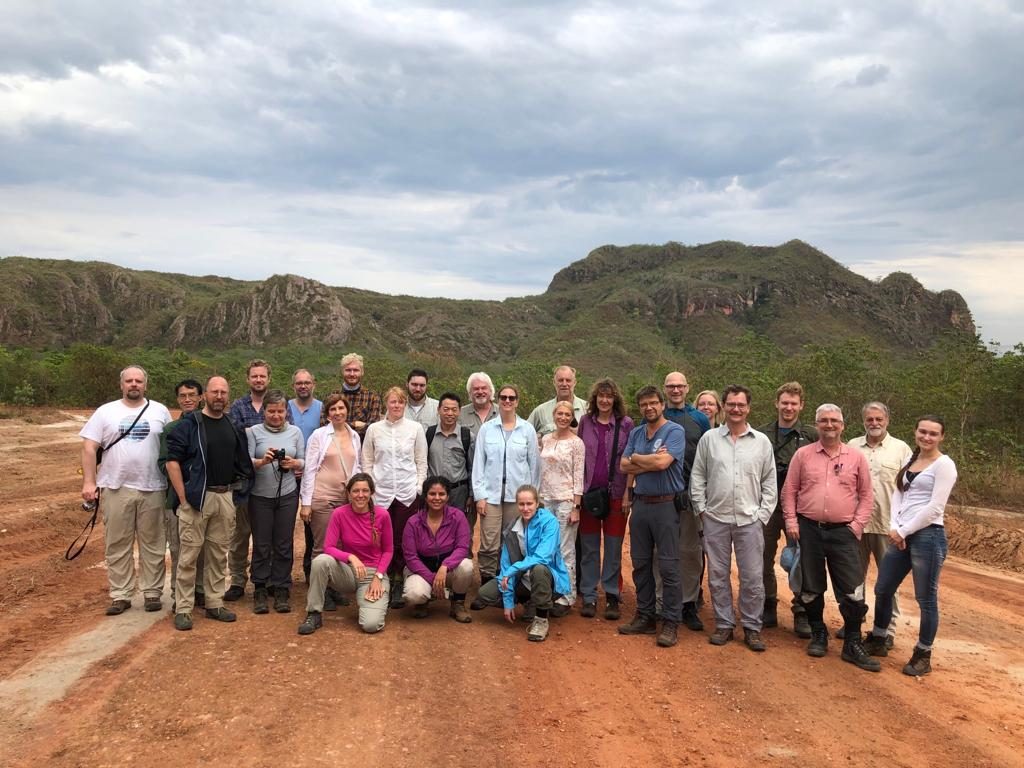 The Araguainha tour in front of the Serra de Arnica folded quartzites.