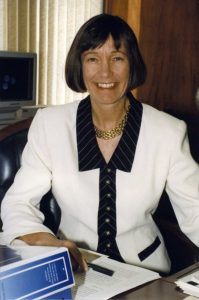 Professor Laurel Wilkening, a meteoriticist, university administrator, and advocate for planetary science and for women’s issues, passed away on June 4, 2019, in Tucson, Arizona, at the age of 74. Born in Richland, Washington, on November 23, 1944, she grew up in Socorro, New Mexico, and got her Bachelor’s degree in Chemistry from Reed College.

It was as an undergraduate that Wilkening became interested in cosmochemistry. She received her Ph.D. from the University of California San Diego in 1970, working with Hans Seuss. In an oral history, she described having recruited two Nobel laureates for her thesis committee, only to have one (Hannes Alfvén) say he would veto her Ph.D. thesis if she left one portion of it in, while the other (Harold Urey) said he would veto it if she took it out. After several days of negotiations, the thesis was approved as written.

Wilkening began her scientific career studying the first samples returned from the Moon, and compared the exposure record of lunar samples, particularly as revealed by damage tracks from cosmic rays, with that of meteoritic regolith breccias. Later, her interests turned to comets. She edited the 1982 University of Arizona Press volume Comets, and was deeply involved with planning of a U.S. mission to Comet Halley that never materialized.

After her graduation, she worked and studied at several institutions, including the Tata Institute of Fundamental Research in Mumbai, the Max Planck Institute for Cosmochemistry in Mainz, and the Muséum National d’Histoire Naturelle in Paris. Wilkening became a faculty member at the University of Arizona in 1973 in the newly formed Department of Planetary Sciences. In 1981, she became head of the department and director of the associated Lunar and Planetary Laboratory. Shortly thereafter, she became the Acting Dean of Sciences at the university when that position was created, and then Vice President for Research. From the beginning of her career at Arizona, she was instrumental in advocating for women’s issues, including pay equity, and was a key figure in the establishment of what is now the Department of Gender and Women’s Studies. In 1988, she became Provost of the University of Washington, the first female to hold that position. In 1993, she became Chancellor of the University of California Irvine, a post from which she retired in 1998.

Throughout her career, Wilkening was a nationally prominent member of the planetary science community. She served as Vice Chair of the Advisory Committee on the Future of the U.S. Space Programs, Chair of the Space Policy Advisory Board, and Vice Chair of the National Commission on Space during the presidencies of Ronald Reagan and George H. W. Bush. Later, she became a member of the Board of Directors of The Planetary Society, serving four years as Vice President of the society.

Asteroid 75562 is named Wilkening in her honor. She was elected a Fellow of the Meteoritical Society in 1978.