Life Could Exist in the Clouds of Jupiter But Not Venus 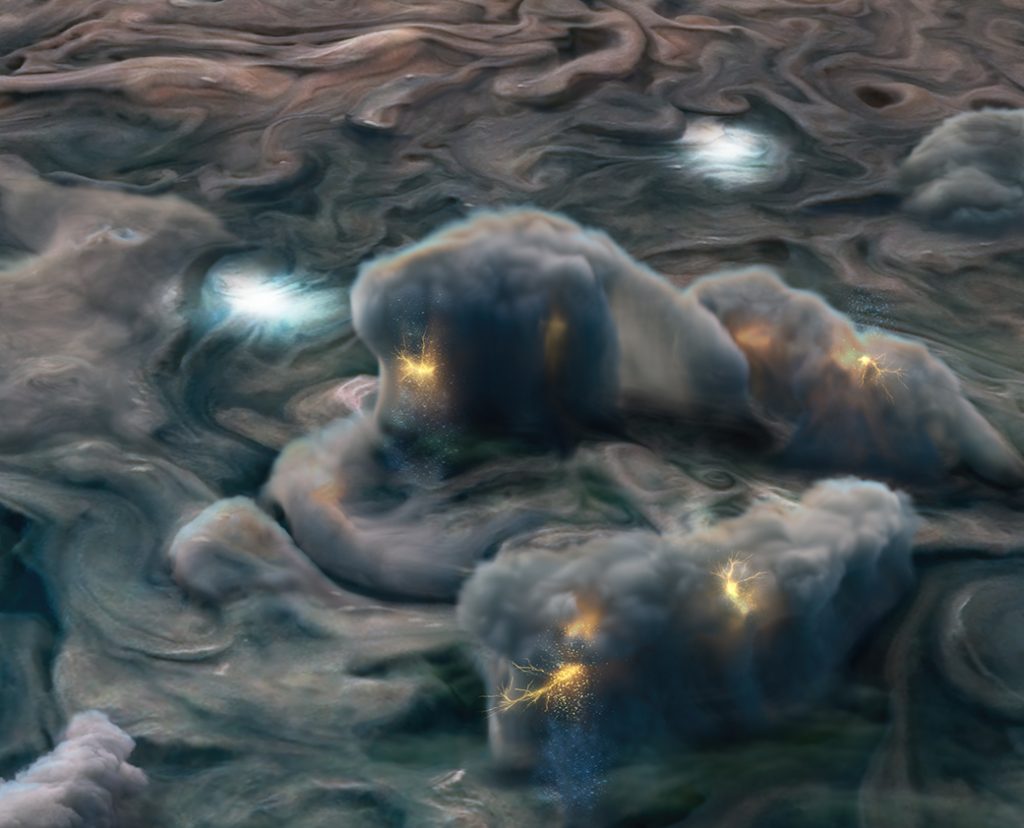 This illustration of stormy clouds on Jupiter is based on images from the Stellar Reference Unit camera of NASA’s Juno mission. Credit:  NASA/JPL-Caltech/SwRI/MSSS/Gerald Eichstädt/Heidi N. Becker/Koji Kuramura.

Jupiter’s clouds have water conditions that would allow Earth-like life to exist, but this isn’t possible in Venus’ clouds, according to groundbreaking new research led by a Queen’s University Belfast scientist.

For decades, space exploration missions have looked for evidence of life beyond Earth where we know that large bodies of water, such as lakes or oceans, exist or have previously existed. However, the new research shows that it isn’t the quantity of water that matters for making life viable, but the effective concentration of water molecules — known as water activity.

The new study also found that research published by an independent team of scientists last year, claiming that the phosphine gas in Venus’ atmosphere indicates possible life in the sulphuric acid clouds of Venus, is not plausible.

Through this innovative research project, Dr. John E. Hallsworth from the School of Biological Sciences at Queen’s and his team of international collaborators devised a method to determine the water activity of atmospheres of a planet. Using their approach to study the sulphuric acid clouds of Venus, the researchers found that the water activity was more than a hundred times below the lower limit at which life can exist on Earth.

The research also shows that Jupiter’s clouds have a high enough concentration of water, as well as the correct temperature, for life to exist there. The study has been published in Nature Astronomy.

Hallsworth said, “Our research shows that the sulphuric acid clouds in Venus have too little water for active life to exist, based on what we know of life on Earth. We have also found that the conditions of water and temperature within Jupiter’s clouds could allow microbial-type life to subsist, assuming that other requirements such as nutrients are present. This is a timely finding given that NASA and the European Space Agency just announced three missions to Venus in the coming years. One of these will take measurements of Venus’ atmosphere that we will be able to compare with our finding.”

Dr. Philip Ball, a co-author of the report and an expert on the physics and chemical biology of water, commented, “The search for extraterrestrial life has sometimes been a bit simplistic in its attitude to water. As our work shows, it’s not enough to say that liquid water equates with habitability. We’ve got to think too about how Earth-like organisms actually use it — which shows us that we then have to ask how much of the water is actually available for those biological uses.”

NASA-based planetary scientist Dr. Christopher P. McKay, another co-author of the report, said, “We derive water activity of atmospheres without a model of any sort, based only on direct observations of pressure, temperature, and water concentration.”

Hallsworth added, “We have also performed calculations for Mars and Earth and show that these calculations can be done for planets outside our solar system. While our research doesn’t claim that alien (microbial-type) life does exist on other planets in our solar system, it shows that if the water activity and other conditions are right, then such life could exist in places where we haven’t previously been looking.”