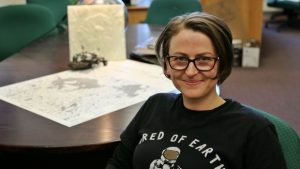 The Lunar and Planetary Institute (LPI) is pleased to announce that the 2017 recipient of the Eugene M. Shoemaker Impact Cratering Award is Maree McGregor of the University of New Brunswick in Canada. McGregor is pursuing a Ph.D. study in geochronology and shock processes of terrestrial impact craters. She is working with Dr. John Spray at the Planetary and Space Science Centre (PASSC), University of New Brunswick. With funds provided from the award, McGregor will revisit the remote Nicholson Lake impact structure, Canada, where she will undertake a detailed mapping campaign of the crater, with sample analysis involving thermobarometric and shock attenuation analysis.

The Eugene M. Shoemaker Impact Cratering Award is designed to support undergraduate and graduate students, of any nationality, working in any country, in the disciplines of geology, geophysics, geochemistry, astronomy, or biology. Grants support the study of impact cratering processes on Earth and other bodies in the solar system, including asteroids and comets that produce impacts and the geological, chemical, or biological results of impact cratering.

This award is generously provided by the Planetary Geology Division of the Geological Society of America and administered by the LPI. It commemorates the work of Eugene (“Gene”) Shoemaker, who greatly influenced planetary sciences during the Apollo era and for several decades thereafter, including the discovery of Comet Shoemaker-Levy 9 with his wife Carolyn and colleague David Levy.

Proposals for next year’s award will be due in September 2018. Applications will be accepted beginning in July 2018. Application details can be found at https://www.lpi.usra.edu/science/kring/Awards/Shoemaker_Award/.