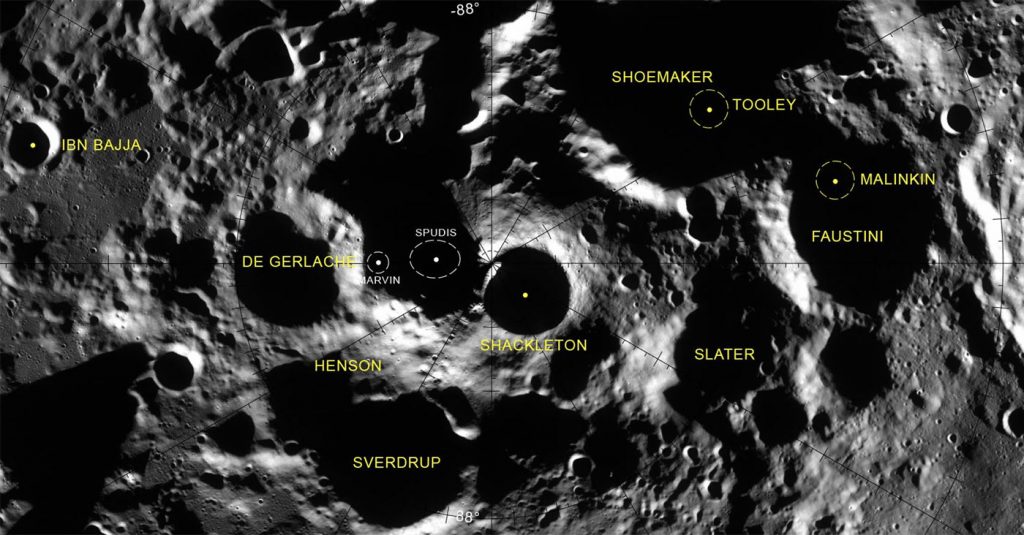 Paul Spudis (1952–2018) of the Lunar and Planetary Institute now has a place on the Moon named in his honor. Spudis crater is located near the Moon’s south pole and is 13 kilometers in diameter.

Mark Robinson of Arizona State University proposed their names in keeping with the policy of naming lunar craters for “Scientists, engineers, and explorers, as well as other persons connected with astronomy, planetary, or space research who have made outstanding or fundamental contributions to their field.”

Robinson submitted the scientific rationale in his proposal, “I am the hopper Science lead for the Intuitive Machines 2 (IM-2) CLPS mission (aka PRIME-1). The mission is slated for launch in December 2022. The Nova C lander and micro-Nova (µNova) hopper are now being constructed. The IM-2 mission is a funded CLPS mission and the hopper is being carried as NASA Tipping Point technology demonstration. The hopper is slated to land within [an unnamed south polar] crater (the first ever vehicle to enter a PSR (permanently shadowed region)). We are working to identify and target sites near the south pole for investigation as future human and robotic landed missions. Communication between targeting groups will be greatly aided if key craters are named (science and navigation landmarks). We are requesting specific names for two larger craters (Spudis and Marvin). We are completing a geologic map of this area and it is now undergoing informal review before formal submission.”

Spudis worked at the Lunar and Planetary Institute for 22 years (1990–2002, 2008–2018). Spudis was an expert in lunar and terrestrial planetary geology, and throughout his career made fundamental contributions to understanding the geology and mechanics of impact basins and craters, the origin and evolution of the lunar crust, volcanic processes on Earth and other planets, and the genesis of lunar polymict breccias. He served as deputy leader of the 1994 Clementine mission science team, led the Mini-SAR radar that flew on India’s Chandrayaan-1 lunar orbiter, and was a team member of the Mini-RF instrument on NASA’s Lunar Reconnaissance Orbiter. A prolific author [e.g., The Once and Future Moon (1994) and The Value of the Moon (2016)] and tireless advocate for a return of humans to the Moon, Spudis served on many panels and advisory committees including the 2004 Presidential Commission on the Implementation of U.S. Space Exploration Policy. He received numerous honors and awards, including the Columbia medal from the American Society of Civil Engineers’ Aerospace division (2016), the National Space Society’s Space Pioneer award (2011), the Theodore von Kármán medal and lectureship from the American Institute of Aeronautics and Astronautics (2006), the NASA Distinguished Public Service medal (2004), and the Aviation Week and Space Technology Laurels award (1994).