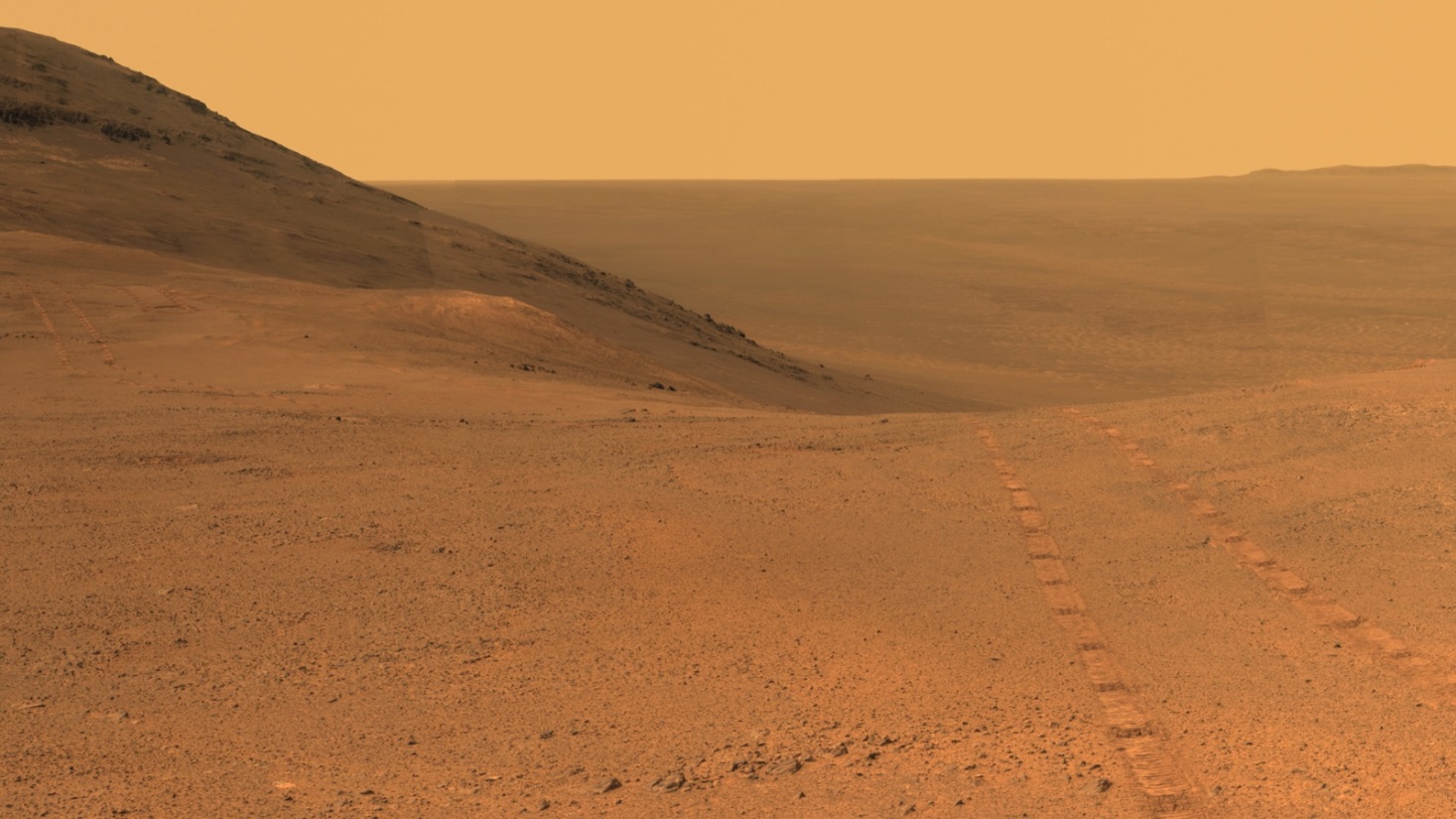 Opportunity’s panoramic camera (Pancam) took the component images for this view from a position outside Endeavor Crater during the span of June 7 to June 19, 2017. Toward the right side of this scene is a broad notch in the crest of the western rim of crater. Credit: NASA/JPL-Caltech/Cornell/Arizona State University.

A planet-encircling dust storm on Mars, which was first detected May 30 and halted operations for the Opportunity rover, continues to abate.

With clearing skies over Opportunity’s resting spot in Mars’ Perseverance Valley, engineers at NASA’s Jet Propulsion Laboratory in Pasadena, California, believe the nearly 15-year-old, solar-powered rover will soon receive enough sunlight to automatically initiate recovery procedures — if the rover is able to do so. To prepare, the Opportunity mission team has developed a two-step plan to provide the highest probability of successfully communicating with the rover and bringing it back online.

“The Sun is breaking through the haze over Perseverance Valley, and soon there will be enough sunlight present that Opportunity should be able to recharge its batteries,” said John Callas, Opportunity project manager at JPL. “When the tau level [a measure of the amount of particulate matter in the martian sky] dips below 1.5, we will begin a period of actively attempting to communicate with the rover by sending it commands via the antennas of NASA’s Deep Space Network. Assuming that we hear back from Opportunity, we will begin the process of discerning its status and bringing it back online.”

The rover’s last communication with Earth was received June 10, and Opportunity’s current health is unknown. Opportunity engineers are relying on the expertise of Mars scientists analyzing data from the Mars Color Imager (MARCI) aboard NASA’s Mars Reconnaissance Orbiter (MRO) to estimate the tau near the rover’s position.

“The dust haze produced by the martian global dust storm of 2018 is one of the most extensive on record, but all indications are it is finally coming to a close,” said MRO Project Scientist Rich Zurek at JPL. “MARCI images of the Opportunity site have shown no active dust storms for some time within about 1,900 miles (3,000 kilometers) of the rover site.”

With skies clearing, mission managers are hopeful the rover will attempt to call home, but they are also prepared for an extended period of silence. “If we do not hear back after 45 days, the team will be forced to conclude that the Sun-blocking dust and the martian cold have conspired to cause some type of fault from which the rover will more than likely not recover,” said Callas. At that point, the team will report to NASA HQ to determine whether to continue with the strategy or adjust it. Callas added, “In the unlikely chance that there is a large amount of dust sitting on the solar arrays that is blocking the Sun’s energy, we will continue passive listening efforts for several months.”

The additional several months for passive listening are an allowance for the possibility that a Red Planet dust devil could come along and literally dust off Opportunity’s solar arrays. Such “cleaning events” were first discovered by Mars rover teams in 2004 when, on several occasions, battery power levels aboard both Spirit and Opportunity increased by several percent during a single martian night, when the logical expectation was that they would continue to decrease. These cleaning dust devils have even been imaged by both rovers on the surface and spacecraft in orbit.

The chances are small that dust accumulation would be the root cause of Opportunity’s lack of communication. Nonetheless, each day during the passive phase, JPL’s Radio Science group will scour the signal records taken by a very sensitive broadband receiver of radio frequencies emanating from Mars, looking for a sign that the rover is trying to reach out.

Even if the team hears back from Opportunity during either phase, there is no assurance the rover will be operational. The impact of this latest storm on Opportunity’s systems is unknown but could have resulted in reduced energy production, diminished battery performance, or other unforeseen damage that could make it difficult for the rover to fully return online.

While the situation in Perseverance Valley is critical, the rover team is cautiously optimistic, knowing that Opportunity has overcome significant challenges during its 14-plus years on Mars. The rover lost use of its front steering — its left-front in June of 2017, and right front in 2005. Its 256-megabyte flash memory is no longer functioning. The team also knows that everything about the rover is well beyond its warranty period — both Opportunity and its twin rover, Spirit, were constructed for 90-day missions (Spirit lasted 20 times longer and Opportunity is going on 60 times). The rovers were designed to travel about 1,000 yards, and Opportunity has logged more than 28 miles. Through thick and thin, the team has seen their rover soldier on. Now, Opportunity engineers and scientists of Opportunity are planning, and hoping, that this latest dilemma is just another bump in their martian road.

“In a situation like this you hope for the best but plan for all eventualities,” said Callas. “We are pulling for our tenacious rover to pull her feet from the fire one more time. And if she does, we will be there to hear her.”

For the current status of Opportunity, visit https://mars.nasa.gov/mer/mission/status_opportunityAll.html.