Mercury:
The View after MESSENGER 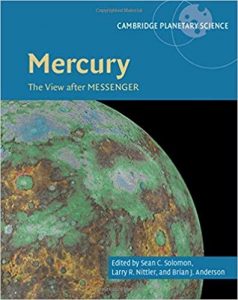 Observations from the first spacecraft to orbit the planet Mercury have transformed our understanding of the origin and evolution of rocky planets. This volume is the definitive resource about Mercury for planetary scientists, from students to senior researchers. Topics treated in depth include Mercury’s chemical composition; the structure of its crust, lithosphere, mantle, and core; Mercury’s modern and ancient magnetic field; Mercury’s geology, including the planet’s major geological units and their surface chemistry and mineralogy, its spectral reflectance characteristics, its craters and cratering history, its tectonic features and deformational history, its volcanic features and magmatic history, its distinctive hollows, and the frozen ices in its polar deposits; Mercury’s exosphere and magnetosphere and the processes that govern their dynamics and their interaction with the solar wind and interplanetary magnetic field; the formation and large-scale evolution of the planet; and current plans and needed capabilities to explore Mercury further in the future.