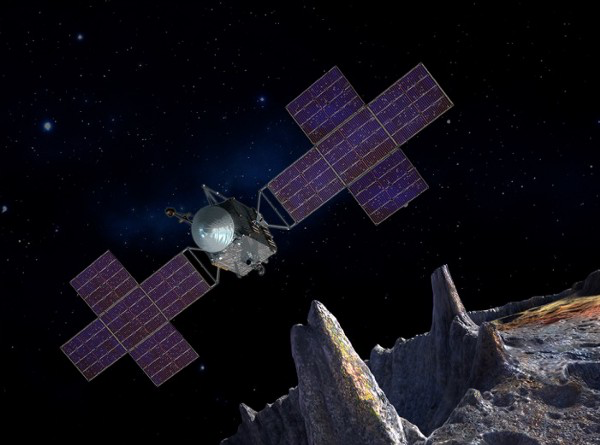 NASA has selected SpaceX of Hawthorne, California, to provide launch services for the agency’s Psyche mission. The Psyche mission currently is targeted to launch in July 2022 on a Falcon Heavy rocket from Launch Complex 39A at Cape Canaveral Air Force Station in Florida.

The total cost for NASA to launch Psyche and the secondary payloads is approximately $117 million, which includes the launch service and other mission- related costs.

The Psyche mission will journey to a unique metal-rich asteroid, also named Psyche, which orbits the Sun between Mars and Jupiter. The asteroid is considered unique, as it appears to largely be made of the exposed nickel-iron core of an early planet — one of the building blocks of our solar system.

Deep within rocky, terrestrial planets, including Earth, scientists infer the presence of metallic cores, but these lie unreachably far below the planet’s rocky mantles and crusts. Because we cannot see or measure Earth’s core directly, the mission to Psyche offers a unique window into the violent history of collisions and accretion that created terrestrial planets.

The launch of Psyche will include two secondary payloads: Escape and Plasma Acceleration and Dynamics Explorers (EscaPADE), which will study the Martian atmosphere, and Janus, which will study binary asteroids.

For more information about the Psyche mission, visit: https://www.nasa.gov/psyche.