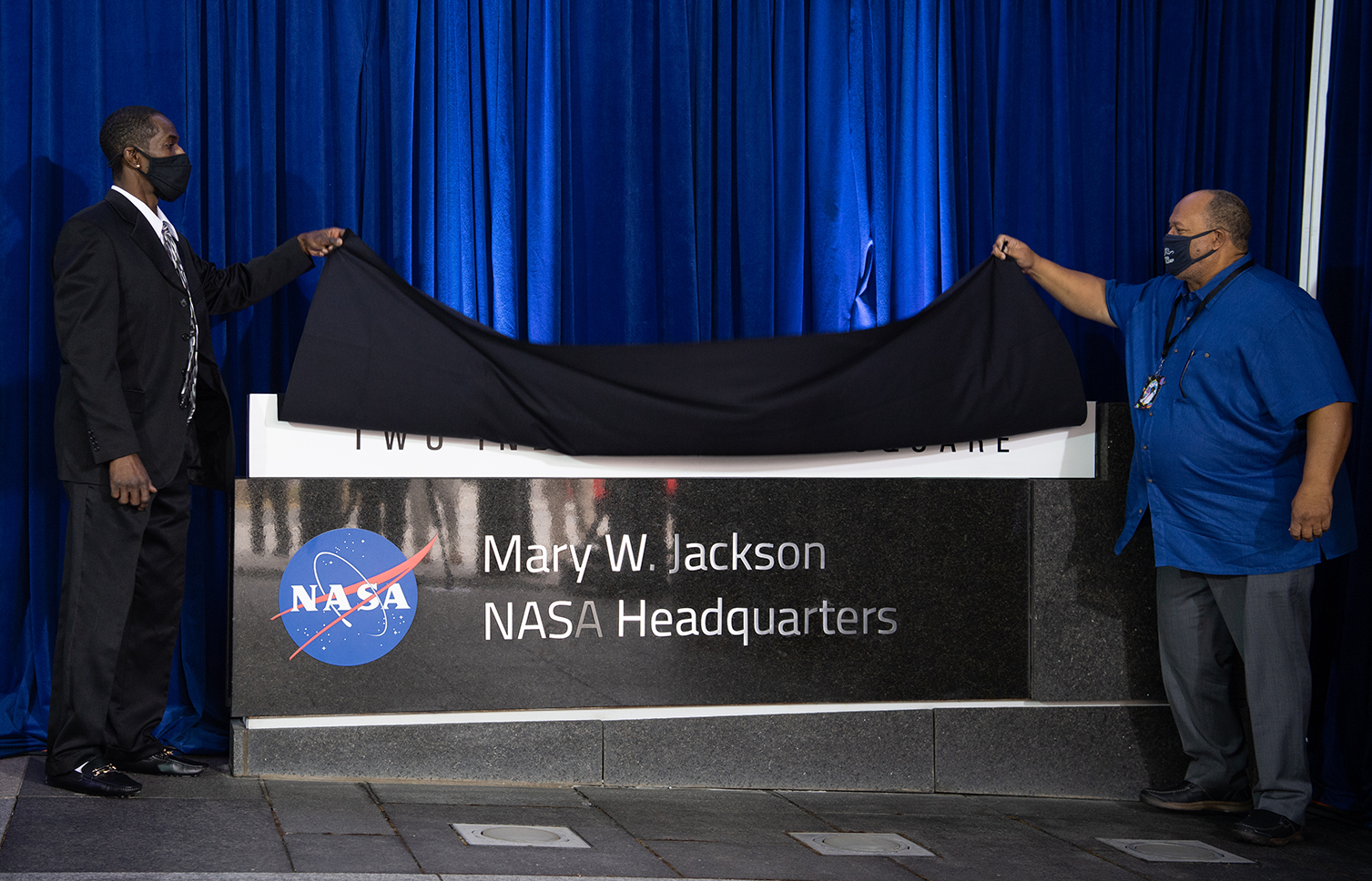 On February 26, 2021, NASA celebrated the agency’s first African American female engineer, Mary W. Jackson, with a ceremony to formally name the agency’s headquarters building in Washington in her honor.

Jackson began working at the National Advisory Committee for Aeronautics (NACA) — the forerunner of NASA — in April 1951. From her initial role as a “human computer” within the segregated West Area Computing Unit of what would become NASA’s Langley Research Center in Hampton, Virginia, to becoming an engineer, to managing Langley’s Federal Women’s Program and championing equal employment opportunity efforts at the center toward the end of her career, Jackson’s pioneering efforts and commitment to helping others have inspired generations — both at NASA and beyond.

The work of Jackson and others in Langley’s West Area Computing Unit caught widespread national attention in the 2016 Margot Lee Shetterly book “Hidden Figures: The American Dream and the Untold Story of the Black Women Mathematicians Who Helped Win the Space Race.” The book was made into a popular movie that same year, with award-winning actress Janelle Monáe playing Jackson’s character.

In 2019, Jackson, along with her fellow “Hidden Figures” Katherine Johnson, Dorothy Vaughan, and Christine Darden, were posthumously awarded the Congressional Gold Medal – the highest civilian award – for their work. On June 24, 2020, NASA announced its intent to name the building the Mary W. Jackson NASA Headquarters building.

In addition to unveiling a building sign with Jackson’s name, Friday’s event featured video tributes with reflections on Jackson’s career and legacy from a variety of individuals, including family and friends, current and former NASA employees and astronauts, celebrities, elected officials, and others. The event also featured a video of poet Nikki Giovanni reading an excerpt from her poem “Quilting the Black-Eyed Pea,” which is about space and civil rights.

Jackson was born and raised in Hampton, Virginia. She initially worked as a math teacher in Calvert County, Maryland, and also held jobs as a bookkeeper and as a U.S. Army secretary before beginning her aerospace career. In 1942, she received a Bachelor of Science degree in mathematics and physical science from Hampton Institute (now Hampton University).

After two years in the computing pool at Langley, Jackson received an offer to work in the 4-by-4-foot Supersonic Pressure Tunnel, a 60,000-horsepower wind tunnel capable of blasting models with winds approaching twice the speed of sound. There, she received hands-on experience conducting experiments. Her supervisor eventually suggested she enter a training program that would allow Jackson to earn a promotion from mathematician to engineer. Because the classes were held at then-segregated Hampton High School, Jackson needed special permission to join her white peers in the classroom.

Jackson completed the courses, earned the promotion, and in 1958 became NASA’s first African American female engineer. For nearly two decades during her engineering career, she authored or co-authored numerous research reports, most of which focused on the behavior of the boundary layer of air around airplanes. In 1979, she joined Langley’s Federal Women’s Program, where she worked hard to address the hiring and promotion of the next generation of female mathematicians, engineers, and scientists. She retired from Langley in 1985 and passed away in Hampton on February 11, 2005, at the age of 83. She was preceded in death by her husband, Levi Jackson Sr., and was survived by her son, Levi Jackson Jr., and her daughter, Carolyn Marie Lewis.

The legacy of Jackson and others lives on through NASA’s continuing commitment to diversity and inclusion. Jackson’s commitment to excellence, diversity, inclusion, and teamwork represents not only the best of NASA’s current talent, but also the future of the agency. Embracing an inclusive culture is central to all NASA does and is reflected in the recent addition of inclusion as one of the agency’s core values, along with safety, integrity, teamwork, and excellence.

View photos from the event at https://flic.kr/s/aHsmUwnzw7.

Read a biography of Mary W. Jackson by Shetterly at https://www.nasa.gov/content/mary-w-jackson-biography.

Learn more about NASA’s Hidden and Modern Figures at https://www.nasa.gov/modernfigures.