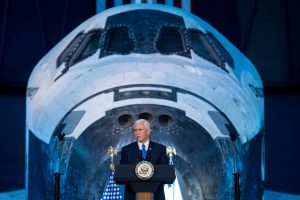 The official charter for the Users’ Advisory Group (UAG) was signed by acting NASA Administrator Robert Lightfoot on December 6, 2017, and subsequently announced in the Federal Register. It explains in detail the role, responsibilities, and operation of the advisory group. The UAG will advise and inform the National Space Council on a broad range of aerospace topics, including the impacts of U.S. and international laws and regulations, national security space priorities relating to the civil and commercial space sectors, scientific and human space exploration priorities, and ways to bolster support for U.S. space priorities and leadership in space.

The UAG will consist of between 15 and 30 members selected to serve in the capacity of either a representative or a special government employee (SGE). Representatives will come from non-federal aerospace organizations, such as private industry, and act as advocates for their sector. SGEs will be selected for their expertise in their particular aerospace field to provide objective advice. More information on the member nomination process will be made available later.

The charter is available on NASA’s website at https://oiir.hq.nasa.gov/acmd.html.