Robotically surveying lunar craters in record time and mining resources in space could help NASA establish a sustained human presence at the Moon – part of the agency’s broader Moon to Mars exploration approach. Two mission concepts to explore these capabilities have been selected as the first-ever Phase III studies within the NASA Innovative Advanced Concepts (NIAC) program.

The inaugural Phase III selections are: 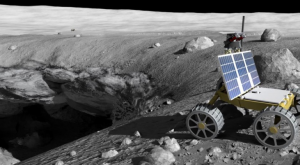 This mission concept, called Skylight, proposes technologies to rapidly survey and model lunar craters. This mission would use high-resolution images to create three-dimensional models of craters. The data would be used to determine whether a crater can be explored by human or robotic missions. The information could also be used to characterize ice on the Moon, a crucial capability for the sustained surface operations of NASA’s Artemis program. On Earth, the technology could be used to autonomously monitor mines and quarries.

This flight demonstration mission concept proposes a method of asteroid resource harvesting called optical mining. Optical mining is an approach for excavating an asteroid and extracting water and other volatiles into an inflatable bag. Called Mini Bee, the mission concept aims to prove that optical mining, in conjunction with other innovative spacecraft systems, can be used to obtain propellant in space. The proposed architecture includes resource prospecting, extraction, and delivery.

NASA selected the Phase III proposals through a review process that evaluated innovativeness and technical viability of the proposed projects. All projects still are in the early stages of development, but this final phase is designed to mature technologies so they can be transitioned to government and industry for implementation.