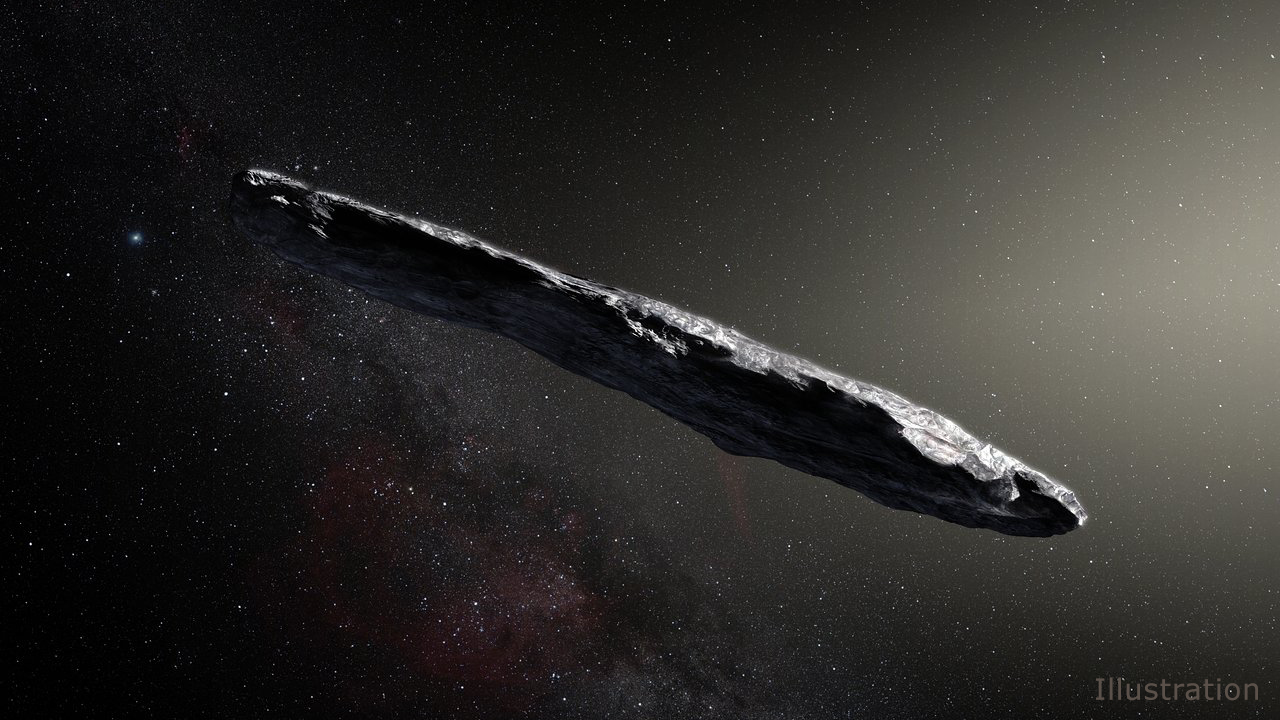 An artist’s concept of interstellar asteroid 1I/2017 U1 (‘Oumuamua) as it passed through the solar system after its discovery in October 2017. Observations of ‘Oumuamua indicate that it must be very elongated because of its dramatic variations in brightness as it tumbled through space. Credit: European Southern Observatory/M. Kornmesser.

In November 2017, scientists pointed NASA’s Spitzer Space Telescope toward the object known as ‘Oumuamua — the first known interstellar object to visit our solar system. The infrared Spitzer was one of many telescopes pointed at ‘Oumuamua in the weeks after its discovery that October.

‘Oumuamua was too faint for Spitzer to detect when it looked more than two months after the object’s closest approach to Earth in early September. However, the “non-detection” puts a new limit on how large the strange object can be. The results are reported in a recent study published in the Astronomical Journal.

The new size limit is consistent with the findings of a research paper published earlier this year, which suggested that outgassing was responsible for the slight changes in ‘Oumuamua’s speed and direction as it was tracked last year: The authors of that paper conclude the expelled gas acted like a small thruster gently pushing the object. That determination was dependent on ‘Oumuamua being relatively smaller than typical solar system comets. (The conclusion that ‘Oumuamua experienced outgassing suggested that it was composed of frozen gases, similar to a comet.)

“‘Oumuamua has been full of surprises from day one, so we were eager to see what Spitzer might show,” said David Trilling, lead author on the recent study and a professor of astronomy at Northern Arizona University. “The fact that ‘Oumuamua was too small for Spitzer to detect is actually a very valuable result.”

‘Oumuamua was first detected by the University of Hawaii’s Pan-STARRS 1 telescope on Haleakala, Hawaii (the object’s name is a Hawaiian word meaning “visitor from afar arriving first”), in October 2017 while the telescope was surveying for near-Earth asteroids.

Subsequent detailed observations conducted by multiple ground-based telescopes and NASA’s Hubble Space Telescope detected the sunlight reflected off ‘Oumuamua’s surface. Large variations in the object’s brightness suggested that ‘Oumuamua is highly elongated and probably less than half a mile (800 meters, or 2,600 feet) in its longest dimension.

But Spitzer tracks asteroids and comets using the infrared energy, or heat, that they radiate, which can provide more specific information about an object’s size than optical observations of reflected sunlight alone would.

The fact that ‘Oumuamua was too faint for Spitzer to detect sets a limit on the object’s total surface area. However, since the non-detection can’t be used to infer shape, the size limits are presented as what ‘Oumuamua’s diameter would be if it were spherical. Using three separate models that make slightly different assumptions about the object’s composition, Spitzer’s non-detection limited ‘Oumuamua’s “spherical diameter” to 440 meters (1,440 feet), 140 meters (460 feet) or perhaps as little as 100 meters (320 feet). The wide range of results stems from the assumptions about ‘Oumuamua’s composition, which influences how visible (or faint) it would appear to Spitzer were it a particular size.

The new study also suggests that ‘Oumuamua may be up to 10 times more reflective than the comets that reside in our solar system — a surprising result, according to the paper’s authors. Because infrared light is largely heat radiation produced by “warm” objects, it can be used to determine the temperature of a comet or asteroid; in turn, this can be used to determine the reflectivity of the object’s surface — what scientists call albedo. Just as a dark T-shirt in sunlight heats up more quickly than a light one, an object with low reflectivity retains more heat than an object with high reflectivity. So a lower temperature means a higher albedo.

A comet’s albedo can change throughout its lifetime. When it passes close to the Sun, a comet’s ice warms and turns directly into a gas, sweeping dust and dirt off the comet’s surface and revealing more reflective ice.

‘Oumuamua had been traveling through interstellar space for millions of years, far from any star that could refresh its surface. But it may have had its surface refreshed through such “outgassing” when it made an extremely close approach to our Sun, a little more than five weeks before it was discovered. In addition to sweeping away dust and dirt, some of the released gas may have covered the surface of ‘Oumuamua with a reflective coat of ice and snow — a phenomenon that’s also been observed in comets in our solar system.

‘Oumuamua is on its way out of our solar system — almost as far from the Sun as Saturn’s orbit — and is well beyond the reach of any existing telescopes.

“Usually, if we get a measurement from a comet that’s kind of weird, we go back and measure it again until we understand what we’re seeing,” said Davide Farnocchia, of the Center for Near Earth Object Studies (CNEOS) at JPL and a coauthor on both papers. “But this one is gone forever; we probably know as much about it as we’re ever going to know.”