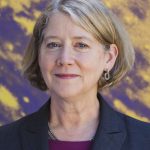 The following is a statement from Acting NASA Administrator Steve Jurczyk on the announcement of the intended nomination by President Joe Biden of former NASA astronaut Pam Melroy to serve as the agency’s deputy administrator:

“Pam’s experience as an astronaut, shuttle space commander, and U.S. Air Force test pilot would bring to NASA a unique perspective on the opportunities and challenges facing the agency. Pam is driven by a desire to solve the biggest issues here on Earth, throughout the solar system, and beyond. She is a proven leader with bold vision and, if confirmed by the Senate, I look forward to working with her and Sen. Nelson to ensure NASA’s future success.”

One of only two women to command a space shuttle, Melroy logged more than 38 days in space. All three of her missions were assembly missions to build the International Space Station. After serving more than two decades in the Air Force and as a NASA astronaut, she took on a number of leadership roles, including at Lockheed Martin, the Federal Aviation Administration, the Defense Advanced Research Projects Agency, Nova Systems Pty, Australia, and as an advisor to the Australian Space Agency. She currently is an independent consultant and a member of the National Space Council’s Users Advisory Group.

For information about NASA’s missions, discoveries, and activities, visit https://www.nasa.gov.