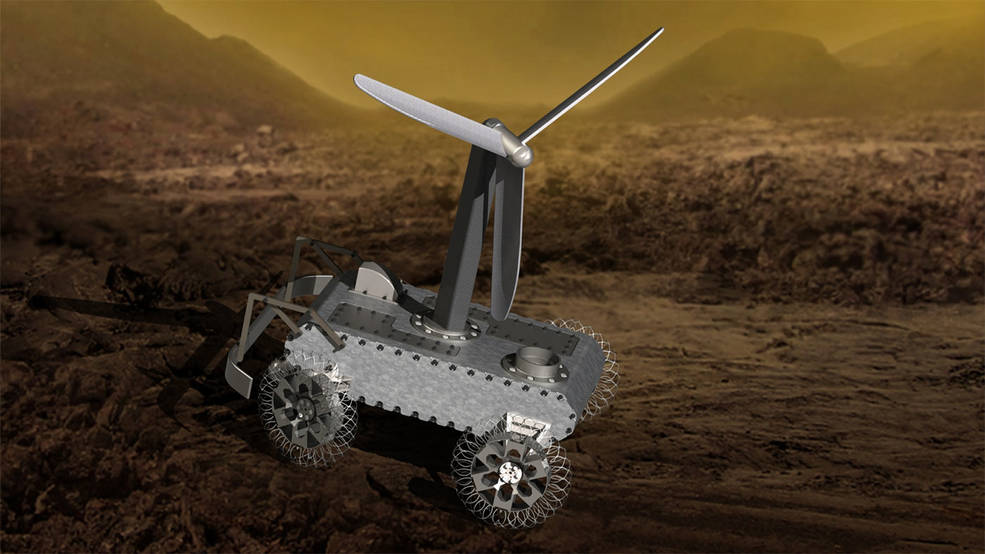 An illustration of a concept for a possible wind-powered Venus rover. Credit: NASA/JPL-Caltech.

NASA’s Jet Propulsion Laboratory in Pasadena, California, under a grant from the NASA Innovative Advanced Concepts program, is running a public challenge to develop an obstacle avoidance sensor for a possible future Venus rover. The “Exploring Hell: Avoiding Obstacles on a Clockwork Rover” challenge is seeking the public’s designs for a sensor that could be incorporated into the design concept.

Venus is an extreme world. With a surface temperature in excess of 840 degrees Fahrenheit and a surface pressure 90 times that of Earth, Venus can turn lead into a puddle and crush a nuclear-powered submarine with ease. While many missions have visited our sister planet, only about a dozen have made contact with the surface of Venus before quickly succumbing to the oppressive heat and pressure.

Exploring and studying different geologic units across the surface of Venus could help us understand the planet’s evolution, and could contribute to a better understanding of Earth’s climate.

Powered by wind, AREE is intended to spend months, not minutes, exploring the Venus landscape. AREE could collect valuable, long-term longitudinal scientific data. As the rover explores the planet, it must also detect obstacles in its path, such as rocks, crevices and steep terrain. And NASA is crowdsourcing help for that sensor design. The challenge’s winning sensor will be incorporated into the rover concept and could potentially one day be the mechanism by which a rover detects and navigates around obstructions.

The difficulty of this challenge is in designing a sensor that does not rely on electronic systems. Current state-of-the-art electronics fail at just over 250 degrees Fahrenheit and would easily succumb to the extreme Venus environment. That is why NASA is turning to the global community of innovators and inventors for a solution.

Participants will have an opportunity to win a first-place prize of $15,000. Second place wins $10,000; and third place, $5,000. JPL is working with the NASA Tournament Lab to execute the challenge on the heroX crowdsourcing platform. Submissions will be accepted through May 29, 2020.

For more information about the challenge and how to enter, visit: https://www.herox.com/VenusRover.