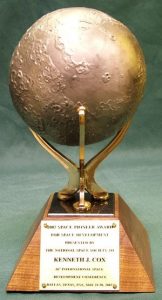 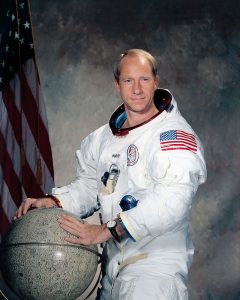 The prestigious award was presented to Worden at the Society’s 38th annual International Space Development Conference (ISDC®), which was held in the Washington, DC, area at the Sheraton Pentagon City Hotel June 6–9, 2019.

This award honors Worden’s service as the Command Module Pilot for Apollo 15. He graduated from West Point with a military B.S. degree in 1955, and then served in the Air Force in various capacities until the mid-1960s, with time off to get two M.S. degrees from the University of Michigan in 1963. Worden then joined NASA in the group of astronauts selected in 1966. He served as part of an astronaut support crew for Apollo 9 and as backup Command Module Pilot for Apollo 12.

Worden flew as Command Module Pilot for Apollo 15, the 1971 mission that landed on the Moon near Hadley Rille. This mission was one of the first where lunar geology was the prime objective and Worden logged over 295 hours in space. During the mission, he operated two lunar mapping cameras and six other instruments mounted in the service module’s new Scientific Instrument Module.

After Apollo, Worden worked at NASA Ames from 1972 to 1975, first as Senior Aerospace Scientist and then as chief of the Systems Study Division. After he left NASA, Worden was president of Maris Worden Aerospace, Inc., and then became staff vice president of Goodrich Aerospace in Ohio.

The Pioneer Award consists of a silvery pewter Moon globe cast by the Baker Art Foundry in Placerville, California, from a sculpture created by well-known astronomical artist Don Davis. The globe, which represents multiple space destinations and goals, sits freely (unattached) on a brass support with a wooden base capped with a black granite inlay, both of which are created by renowned sculptor Michael Hall of Studio Foundry of Driftwood, Texas. The brass plaque on the base is created by Art Hall Awards of Austin.