New Discovery:
First Asteroid Population from Outside Our Solar System 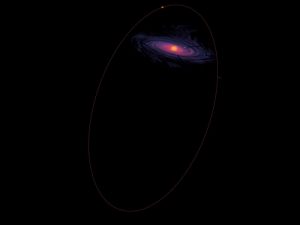 Illustration of the orbit of a Centaur asteroid 4.5 billion years ago, relative to the protoplanetary disk. The asteroid orbits around the Sun far from the disk in a plane perpendicular to it. Credit: NASA.

Ka`epaoka`awela asteroid surprised the world in 2018:  It was the first object in the solar system that was demonstrated to be of extrasolar origin. But now those who discovered it have announced that it is not alone. Published in the Monthly Notices of the Royal Astronomical Society in April, work by Fathi Namouni, a CNRS researcher in the Laboratoire Lagrange (CNRS/Observatoire de la Côte d’Azur/Université Côte d’Azur), and Helena Morais, researcher at UNESP in Brazil, proves that at least 19 other asteroids orbited another star before joining our system.

Although some interstellar bodies only pass through, others remain and orbit the Sun. This is the case for 19 asteroids that gravitate between Jupiter and Neptune. According to the two scientists’ calculations, their current orbits and characteristics can only be explained if these objects were not in our solar system at its birth, 4.5 billion years ago.

They are all part of the Centaur family, asteroids located between the gas giants that sometimes behave like comets, and whose orbits computer models cannot explain or predict. Fathi Namouni and Helena Morais chose to develop a very precise simulation of the orbits of these asteroids that “went back in time” to find their past positions.

The objects in our system already orbited the Sun 4.5 billion years ago in the same plane as the dust and gas disk in which they were formed. However, the 19 Centaurs were not part of this disk. The simulations show not only that these Centaurs orbit the Sun on a plane perpendicular to planetary motion at that time, but also that they were located far from the disk that gave rise to solar system asteroids.

These 19 asteroids were not part of the solar system when it was born. Stellar proximity in the Sun’s birth cluster gave rise to strong gravitational interactions that allowed stellar systems to capture asteroids from one another. The scientists now plan to continue this work by looking for specific events when common capture of several extrasolar bodies occurred.