Newly Discovered Planet Zips Around Baby Star in a Week 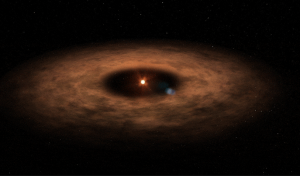 Understanding how planets form is one of the main challenges scientists face when placing our own and other planetary systems in context. Planets are thought to form from the disk-shaped clouds of gas and dust that surround newborn stars, but this process has never been observed. Astronomers normally only observe planets after they have already formed and have to deduce the pathways that that led to their final states.

For more than a decade, astronomers have searched for planets orbiting AU Microscopii, a nearby star still surrounded by a disk of debris left over from its formation. Now scientists using data from NASA’s Transiting Exoplanet Survey Satellite (TESS) and now-retired Spitzer Space Telescope report the discovery of a planet about as large as Neptune that circles the young star in just over a week.

The new planet, AU Mic b, is located 31.9 light-years away in the southern constellation Microscopium and described in a paper published in Nature. The system, commonly referred to as AU Mic, provides a one-of-a-kind laboratory for studying how planets and their atmospheres form, evolve, and interact with their stars.

“Finding a ‘missing link,’ such as the planet orbiting AU Mic, essentially caught in the act of forming, is extremely rare,” said co-author Stephen Kane, an associate professor in the Department of Earth and Planetary Sciences at the University of California, Riverside. “What makes this especially rare is that it also transits its star, so we can measure the radius as well as the mass, leading to an estimate of the bulk density of the planet and its likely composition.

“This discovery will form the foundation for many years of observational and theoretical studies into the very earliest stages for planet formation,” added Kane, who helped develop the instrument that measured the planet mass and was part of the TESS team that discovered the transit of the planet.

AU Mic is a cool red dwarf star with an age estimated at 20 million to 30 million years, making it a stellar infant compared to our Sun, which is at least 150 times older. The planet AU Mic b almost hugs its star, completing an orbit every eight-and-a-half days. It weighs less than 58 times Earth’s mass, placing it in the category of Neptune-like worlds.

Read the whole story at https://news.ucr.edu/articles/2020/06/24/newly-discovered-planet-zips-around-baby-star-week.