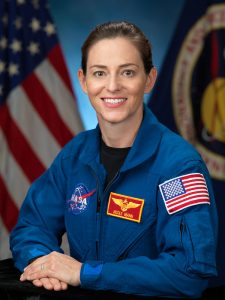 Astronaut Nicole Mann made history on October 5, 2022, as the first Indigenous woman in space. A member of the Wailacki of the Round Valley Indian Tribes, she’ll do research onboard the International Space Station with NASA’s SpaceX Crew5 mission.

Mann was selected in June 2013 as one of eight members of the 21st NASA astronaut class. Her astronaut candidate training included intensive instruction in International Space Station systems, spacewalks, Russian language training, robotics, physiological training, T-38 flight training, and water and wilderness survival training. She completed astronaut candidate training in July 2015. She has served as the T-38 Safety and Training Officer and as the Assistant to the Chief Astronaut for Exploration where she led the astronaut corps in the development of the Orion spacecraft, Space Launch System, and Exploration Ground Systems for missions to the Moon.