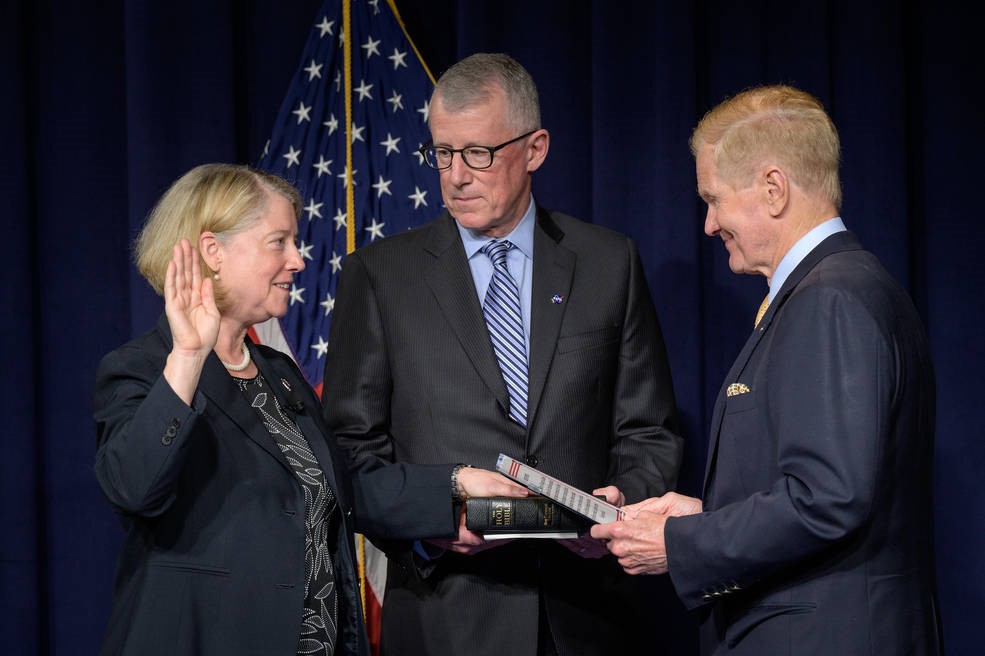 “It is a joy to be back in the NASA family, the smartest and most dedicated workforce of any place that I’ve ever worked. I always knew this was the most exciting place to work from the time I was a child, inspired by the first landing on the Moon,” Melroy said. “I’m very honored to be teamed with Administrator Nelson and our Associate Administrator Bob Cabana and the rest of the NASA team. We do have a lot of work to do, but it’s our intention not to just lead today’s NASA, but also lead us forward into the future and support the generations of fantastic things that NASA will continue to do.”

Melroy was nominated in April by President Biden and confirmed by the Senate on June 17. Along with Nelson, Melroy is responsible for providing overall leadership, planning, and policy direction for NASA.

“What a grand occasion for us! Pam is extremely skilled, experienced, and ready for this job,” Nelson said. “Pam is an ROTC graduate and an Air Force officer. She was one of two female test pilots for the Air Force and one of two female NASA astronaut commanders; she’s logged over 6,000 hours in aircraft, and she has logged many, many days in space. And, now, Pam is the first woman astronaut to serve as deputy administrator here at NASA.”

One of only two women to command a space shuttle, Melroy logged more than 38 days in space. She served as a pilot on two flights, STS-92 in 2000 and STS-112 in 2002, and was the mission commander on STS-120 in 2007. All three of her missions were assembly missions to build the International Space Station.

After graduating from the United States Air Force Test Pilot School, Melroy logged more than 6,000 flight hours in more than 50 different aircraft. She is a veteran of Operation Desert Shield/Desert Storm and Operation Just Cause, with more than 200 combat and combat support hours.

After serving more than two decades in the Air Force and as a NASA astronaut, Melroy took on a number of leadership roles, including at Lockheed Martin, the Federal Aviation Administration, the Defense Advanced Research Projects Agency, Nova Systems Pty, Australia, and as an advisor to the Australian Space Agency. She also served as an independent consultant and a National Space Council’s Users Advisory Group member.

Melroy holds a bachelor’s degree in physics and astronomy from Wellesley College and a master’s degree in Earth and planetary sciences from the Massachusetts Institute of Technology.