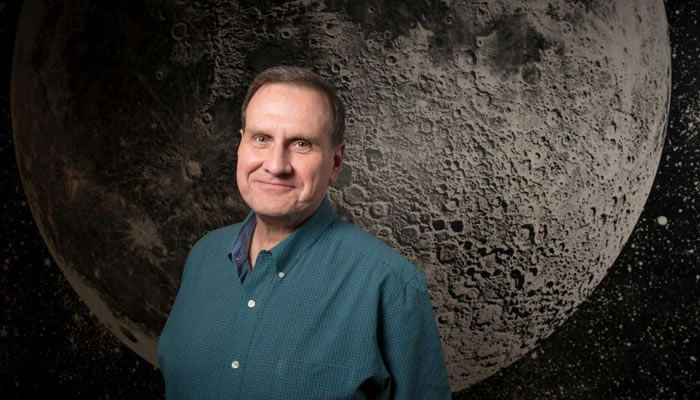 We at the Lunar and Planetary Institute (LPI) are very sad to note that our friend and colleague, Paul Spudis, has passed away. Spudis was an expert in lunar and terrestrial planetary geology, and throughout his career made fundamental contributions to understanding the geology and mechanics of impact basins and craters, the origin and evolution of the lunar crust, volcanic processes on the Earth and planets, and the genesis of lunar polymict breccias. He was also a key proponent of the return of humans to the lunar surface, in recent years working on design mission architectures to serve science and resource utilization objectives.

Although he had originally planned to become an electrical engineer, after watching the Apollo 15 astronauts exploring the lunar surface, Spudis became convinced that geology was essential to understanding the Moon and changed his major accordingly. He received his Ph.D. in Geology from Arizona State University in 1982, under the supervision of Ron Greeley.

After graduation, Spudis took a position as a geologist at the U.S. Geological Survey in Flagstaff, Arizona, where he served as the Principal Investigator for NASA’s Planetary Geology Program. In 1990 Spudis came to the LPI as a staff scientist, serving in 1994 as Deputy Science Team leader of the BMDO/NASA Clementine mission to the Moon, and as Deputy Director of the LPI from 1999 to 2002. From 2002 to 2008 Spudis was a principal professional staff member at the Johns Hopkins University Applied Physics Laboratory, during which time he led the Mini-SAR radar that flew on India’s Chandrayaan-1 lunar orbiter and was a team member of the Mini-RF instrument on NASA’s Lunar Reconnaissance Orbiter. He returned to the LPI as a senior staff scientist in 2008, where he continued his mission work and became more involved in activities focused on living and working on the Moon.

Spudis served on many panels and committees including, at President G. W. Bush’s request, the Presidential Commission on the Implementation of U.S. Space Exploration Policy (2004). He received numerous honors and awards, including the Columbia medal from the American Society of Civil Engineers’ Aerospace division (2016), the National Space Society’s Space Pioneer award (2011), the Theodore von Karman medal and lectureship from the American Institute of Aeronautics and Astronautics (2006), the NASA Distinguished Public Service medal (2004), and the Aviation Week and Space Technology Laurels award (1994). Spudis was scheduled to give the Michel T. Halbouty Lecture, entitled “The Resources of the Moon,” at this November’s Geological Society of America conference. Asteroid 7560 Spudis was named in his honor in 1999. Spudis wrote over 125 refereed papers; 4 single-author books, including The Once and Future Moon (1994) and The Value of the Moon (2016); 3 co-authored books, including the Clementine Atlas of the Moon, the first atlas to cover the entire Moon; two geological maps Mercury and Io; and numerous popular press articles and blog posts, including an ongoing series for the Smithsonian Air and Space website.

Spudis was an integral member of the LPI science staff, contributing his expertise in many areas. He oversaw the LPI summer internship program for almost a decade, was Director of LPI’s Regional Planetary Image Facility, gave his time and energy to LPI’s Planetary Newsletter, Cosmic Explorations lectures, and SkyFest events, and gave numerous public talks. He mentored many students over the years, and was always generous with his advice and expertise. He will be greatly missed.

— Text courtesy of the Lunar and Planetary Institute