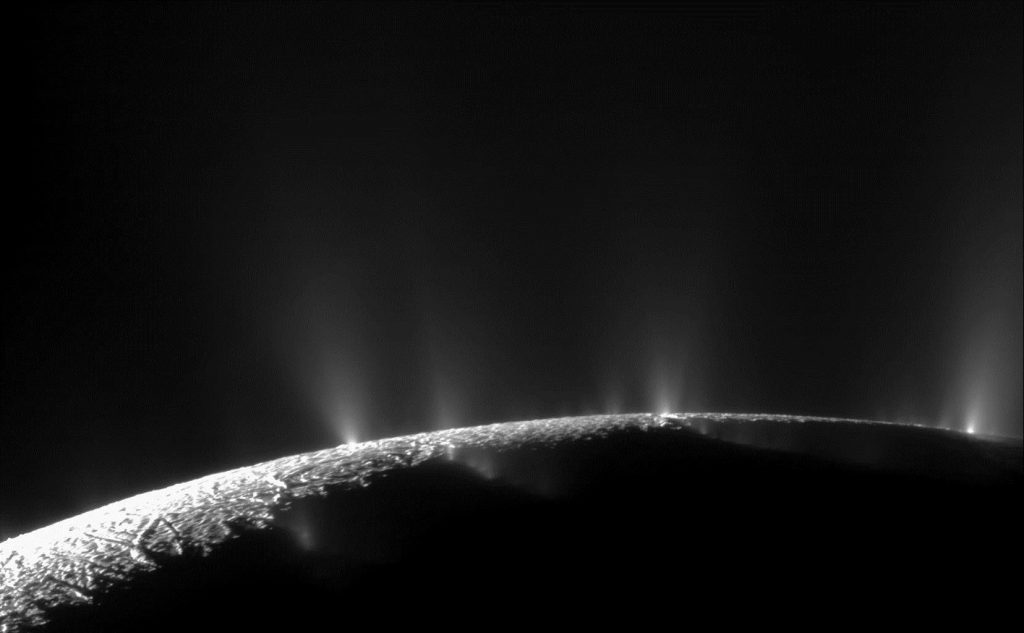 A recent study has provided new insights into how the warm interior of Saturn’s geologically active moon Enceladus could be sustained for billions of years. Credit: NASA/JPL-Caltech/Space Science Institute.

Heat from friction could power hydrothermal activity on Saturn’s moon Enceladus for billions of years if the moon has a highly porous core, according to a new modeling study by European and U.S. researchers working on NASA’s Cassini mission.

The study, published today in the journal Nature Astronomy, helps resolve a question scientists have grappled with for a decade:  Where does the energy to power the extraordinary geologic activity on Enceladus come from?

Cassini found that Enceladus sprays towering, geyser-like jets of water vapor and icy particles, including simple organics, from warm fractures near its south pole. Additional investigation revealed the moon has a global ocean beneath its icy crust, from which the jets are venting into space. Multiple lines of evidence from Cassini indicate that hydrothermal activity — hot water interacting chemically with rock — is taking place on the seafloor.

One of those lines was the detection of tiny rock grains inferred to be the product of hydrothermal chemistry taking place at temperatures of at least 90°C (194°F). The amount of energy required to produce these temperatures is more than scientists think could be provided by decay of radioactive elements in the interior.

“Where Enceladus gets the sustained power to remain active has always been a bit of a mystery, but we’ve now considered in greater detail how the structure and composition of the moon’s rocky core could play a key role in generating the necessary energy,” said the study’s lead author, Gaël Choblet from the University of Nantes in France.

Choblet and co-authors found that a loose, rocky core with 20–30% empty space would do the trick. Their simulations show that as Enceladus orbits Saturn, rocks in the porous core flex and rub together, generating heat. The loose interior also allows water from the ocean to percolate deep down, where it heats up, then rises, interacting chemically with the rocks. The models show this activity should be at a maximum at the moon’s poles. Plumes of the warm, mineral-laden water gush from the seafloor and travel upward, thinning the moon’s ice shell from beneath to only 1 to 5 kilometers (half a mile to 3 miles) at the south pole. (The average global thickness of the ice is thought to be about 20 to 25 kilometers, or 12 to 16 miles.) This same water is then expelled into space through fractures in the ice.

The study is the first to explain several key characteristics of Enceladus observed by Cassini: the global ocean, internal heating, thinner ice at the south pole, and hydrothermal activity. It doesn’t explain why the north and south poles are so different though. Unlike the tortured, geologically fresh landscape of the south, Enceladus’ northern extremes are heavily cratered and ancient. The authors note that if the ice shell was slightly thinner in the south to begin with, it would lead to runaway heating there over time.

The researchers estimate that, over time (between 25 and 250 million years), the entire volume of Enceladus’ ocean passes through the moon’s core. This is estimated to be an amount of water equal to 2% of the volume of Earth’s oceans.

Flexing of Enceladus’ icy crust due to the tidal pull of Saturn had previously been considered as a heat source, but models showed this would not produce enough sustained power. The ocean in Enceladus would have frozen within 30 million years. Although past studies modeled how tidal friction could generate heat in the moon’s core, they made simpler assumptions or simulated the moon in only two dimensions. The new study ramped up the complexity of the model and simulated Enceladus in three dimensions.

Although the Cassini science team had suspected for years that a porous core might play an important role in the mystery of Enceladus’ warm interior, this study brings together several more recent lines of evidence in a very elegant way, according to NASA’s Cassini Project Scientist Linda Spilker at the Jet Propulsion Laboratory in Pasadena, California. “This powerful research makes use of newer details — namely that the ocean is global and has hydrothermal activity — that we just didn’t have until the past couple of years. It’s an insight that the mission needed time to build, one discovery upon another,” she said.