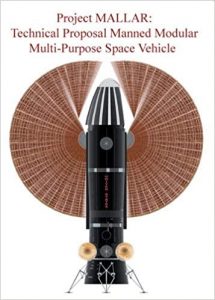 In the spring of 1961, President John Kennedy challenged his country to place humans on the Moon and return them to Earth by the end of the decade. It seemed an audacious proposal to outside observers, but also to the heads of the two-year-old National Aeronautics and Space Administration. There were people in the aerospace community outside of NASA who were sure that a manned mission to the Moon was possible within ten years, and they had known this since at least 1958, when NASA didn’t even exist. Enthusiastic advocates included the German rocket scientists working for the Army under Wernher von Braun, a team of military engineers working for the U.S. Air Force under General Bernard Schriever, and a team of engineers working under Conrad Lau at the Vought Aircraft Astronautics Division, whose efforts remained largely unknown. Between the spring of 1958 and Christmas 1959, Lau and his team worked out the most effective way to get to the Moon using the advanced rockets being proposed by von Braun’s team. Following a visit by Congressman Olin Teague, Vought’s manager John Clark sent Lau’s report to Abe Silverstein, head of manned space flight at NASA. Less than a month later, Silverstein ordered his advanced design leader, Robert Piland, to essentially work from Lau’s ideas to create a modular spacecraft system for Apollo. It would be two years later that NASA would then adopt the method by Lau to leave the main spacecraft in lunar orbit to save fuel. Only ten copies of this report were originally distributed — until now.