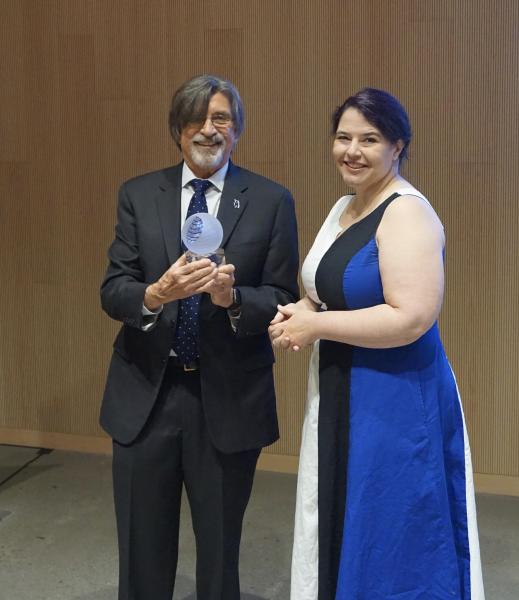 Gay, a Senior Scientist at PSI, is an astronomer, writer, and podcaster focused on using new media to engage people in science and technology. She is co-host of the Astronomy Cast podcast and one of the streamers for the CosmoQuestX Twitch channel, programs at PSI. She also heads CosmoQuest.org, which allows everyday people to do citizen science.

“To receive an award named after Isaac Asimov is a particular honor. My own love of science originated in a love for science fiction and a desire to learn what science in that fiction could be made possible,” Gay said. “Today I hope to find ways to inspire future writers to write new stories using modern science. It is through those future histories that we so often learn how science can potentially corrupt, but also advance and liberate our society.”

Gay urged the audience to “science,” specifically in an effort to search the surface of asteroid Bennu for a site that is safe, conducive to sample collection and worthy of a closer study by NASA’s OSIRIS-REx spacecraft that is now circling the asteroid.

Through PSI’s CosmoQuest program, the public can help find the best place on Bennu to collect a sample for return to Earth for study by going to Bennu.cosmoquest.org and marking the locations of small rocks, boulders, and craters in high-resolution images.