The Pluto System After New Horizons 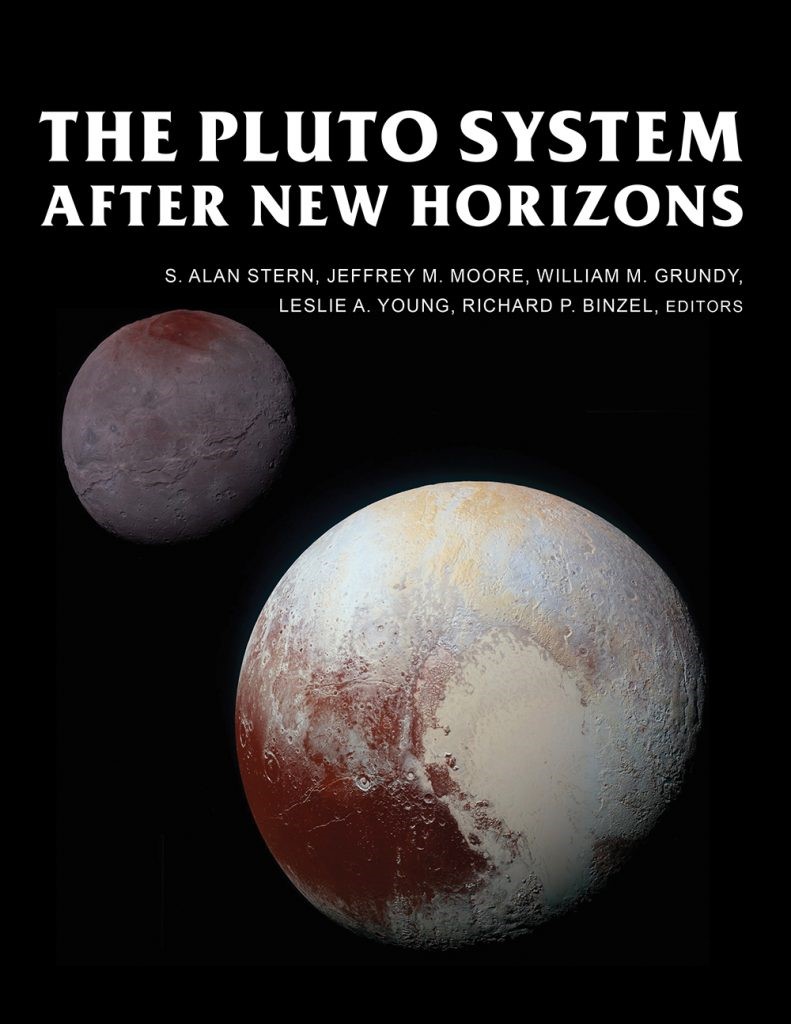 Edited by S. Alan Stern, Jeffrey M. Moore, William M. Grundy, Leslie A. Young, and Richard P. Binzel
University of Arizona Press, 2021, 926 pp., Hardcover. $65.00. www.uapress.arizona.edu In the decades following Voyager mission, a mission to the Pluto system was not only imagined but also achieved, culminating with the historic 2015 flyby by the New Horizons spacecraft. Pluto and its satellite system (“the Pluto system”), including its largest moon, Charon, have been revealed to […] 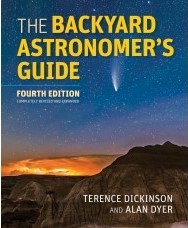 By Terence Dickinson and Alan Dyer
Firefly Books, 2021, 416 pp., Hardcover. $49.95. www.fireflybooks.com This classic, groundbreaking guide has been the go-to field guide for both beginning and experienced amateur astronomers for nearly 30 years. The fourth edition brings Terence Dickinson and Alan Dyer’s invaluable manual completely up to date. Setting a new standard for astronomy guides, it will serve as […]

The Mission: A True Story 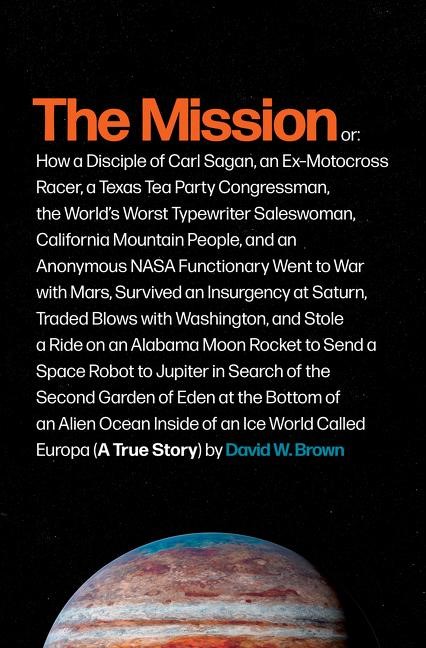 By David Brown
HarperCollins, 2021, 480 pp., Hardcover. $35.00. www.harpercollins.com In the spirit of Tom Wolfe and John McPhee, The Mission reveals how a motley, determined few expanded the horizon of human achievement. When scientists discovered the first ocean beyond Earth, they had two big questions: “Is it habitable?” and “How do we get there?” To answer the first, they […]

The Impact of Lunar Dust on Human Exploration 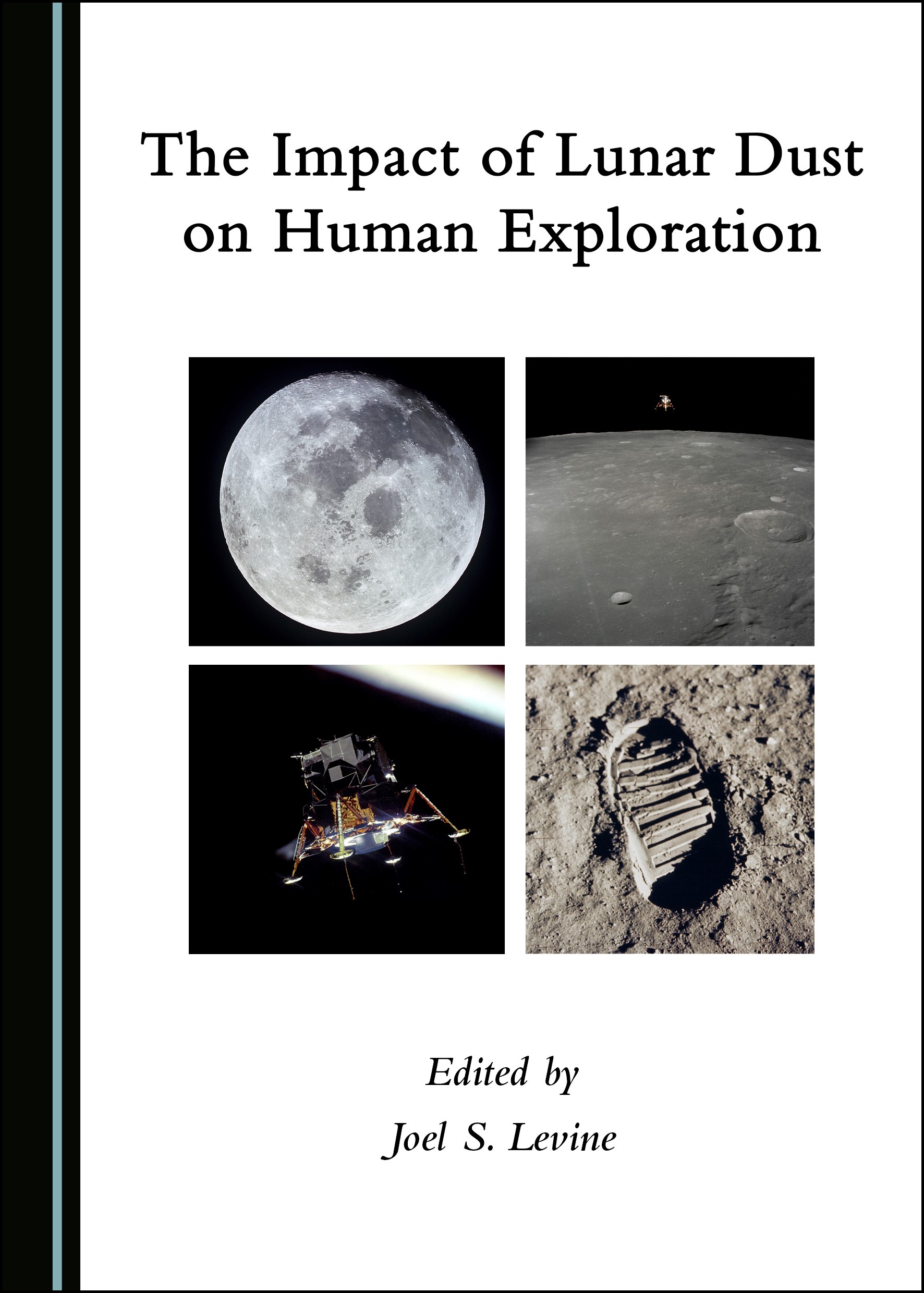 Edited by Joel S. Levine
Cambridge Scholars Publishing, 2021, 303 pp., Hardcover. £64.99. www.cambridgescholars.com When the Apollo 11 astronauts landed on the Moon on July 20, 1969, they made a very important discovery. During their landing on the surface of the Moon, the exhaust gases released from the Lunar Module landing rockets caused large amounts of surface dust to move […]

The Artemis Lunar Program: Returning People to the Moon 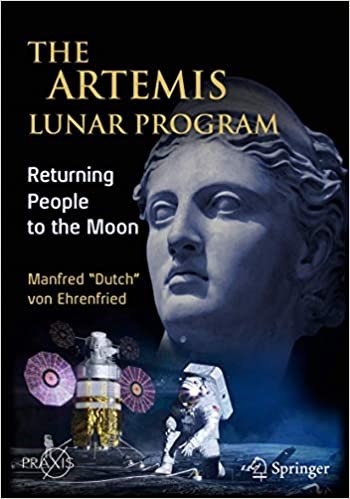 By Manfred “Dutch” von Ehrenfried
Springer, 2020, 307 pp., Paperback. $34.99. www.springer.com This book describes the future of the Artemis Lunar Program from the years 2017 to about 2030. Despite the uncertainty of the times and the present state of space exploration, it is likely that what is presented in this book will happen, to one degree or another. Elements of the proposed program are described from […]

Mars Geological Enigmas: From the Late Noachian Epoch to the Present Day 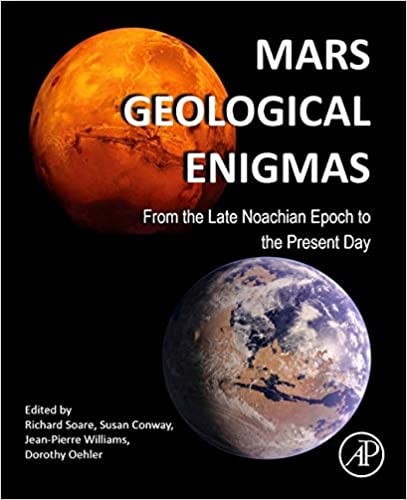 Edited by Richard Soare, Susan Conway, Jean-Pierre Williams, and Dorothy Oehler
Elsevier, 2021, 560 pp., Paperback. $150.00. www.elsevier.com Mars Geological Enigmas: From the Late Noachian Epoch to the Present Day presents outstanding questions on the geology of Mars and divergent viewpoints based on varying interpretations and analyses. The result is a robust and comprehensive discussion that provides opportunities for planetary scientists to develop their own opinions […] 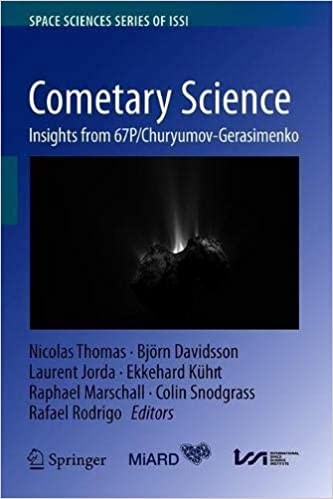 Edited by Nicolas Thomas, Björn Davidsson, Laurent Jorda, Ekkehard Kührt, Raphael Marschall, Colin Snodgrass, and Rafael Rodrigo
Springer, 2021, 421 pp., Hardcover. $169.99. www.springer.com This book gives a status report on where we stand today in studies of cometary nuclei and their immediate environment. The papers were derived from a Horizon 2020 project called MiARD (Multi-instrument Analysis of Rosetta Data), which was designed to use multiple datasets from the Rosetta mission to […] 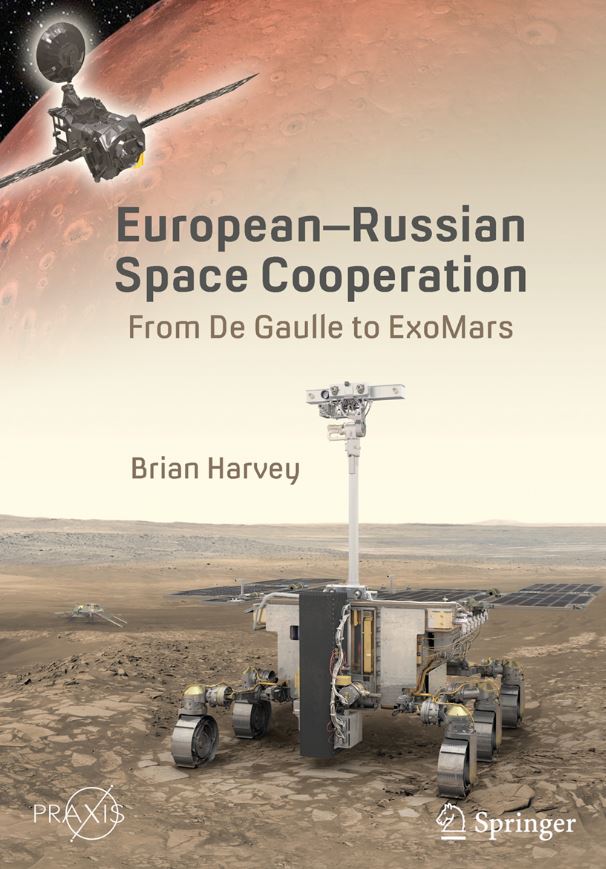 By Brian Harvey
Springer, 2021, 406 pp., Paperback. $34.99. www.springer.com The story of European-Russian collaboration in space is little known and its importance all too often understated. Because France was the principal interlocutor between these nations, such cooperation did not receive the attention it deserved in English-language literature. This book rectifies that history, showing how Russia and Europe […] 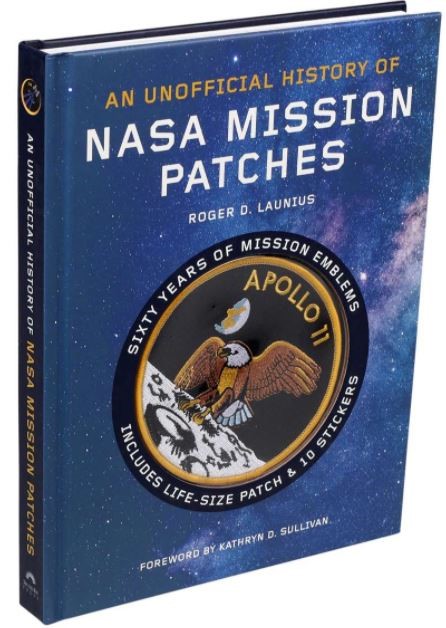 By Roger D. Launius
Thunder Bay Press, 2020, 208 pp., Hardcover. $22.99. www.thunderbaybooks.com Celebrate 60 years of the U.S. space program with An Unofficial History of NASA Mission Patches, featuring the astronauts’ patches from more than 170 of the most important NASA missions. Each entry includes a full-color image of the patch, details about the space mission, the patch’s design, […] 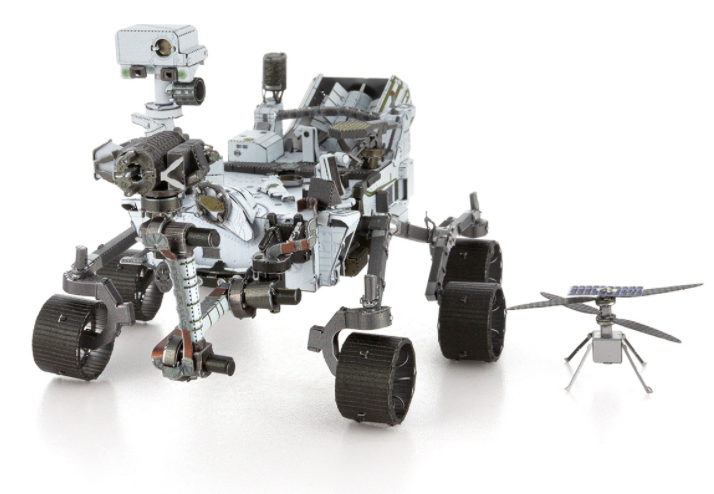 Produced by Metal Earth
$24.95. www.metalearth.com This unassembled 4.5-sheet model is packed in an envelope with easy-to-follow instructions. No glue or solder is required for assembly — parts can be easily clipped from the metal sheets. Pop out the pieces and connect using tabs and holes. Tweezers are the recommended tool for bending and twisting the connection tabs. The […]

A Quick History of the Universe: From the Big Bang to Just Now 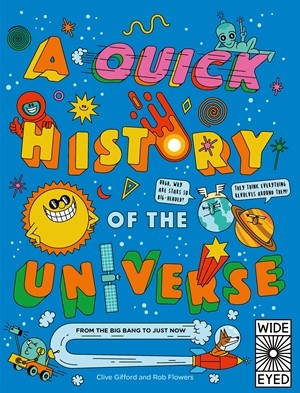 By Clive Gifford
Wide-Eyed Editions, 2021, 128 pp., Paperback. $14.99. www.quartoknows.com Strap in for a rip-roaring ride through the history of the universe, starting with the Big Bang, and bringing us right up to present day. What was the universe like when it was a few seconds old? How had it changed by its millionth birthday? And when […]

Natural Satellites: The Book of Moons 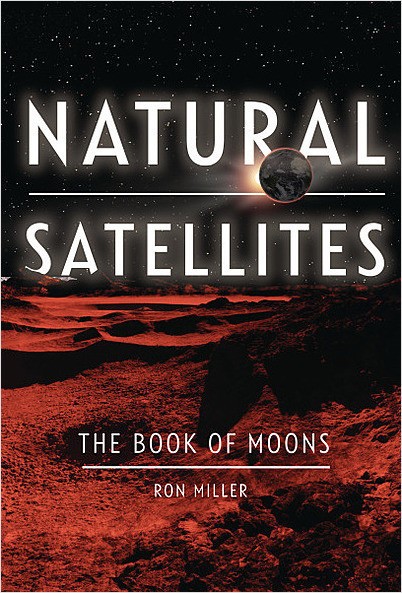 By Ron Miller
Lerner Publishing, 2021, 104 pp., Hardcover. $27.99. www.lernerbooks.com For centuries, astronomers have placed a special interest on the other planets of the solar system. But with the advent of spacecraft and the tremendous missions undertaken by the Voyager and Cassini probes, astronomers have discovered that the natural satellites of the planets — the solar system’s […]

3-D Planets in a Tube 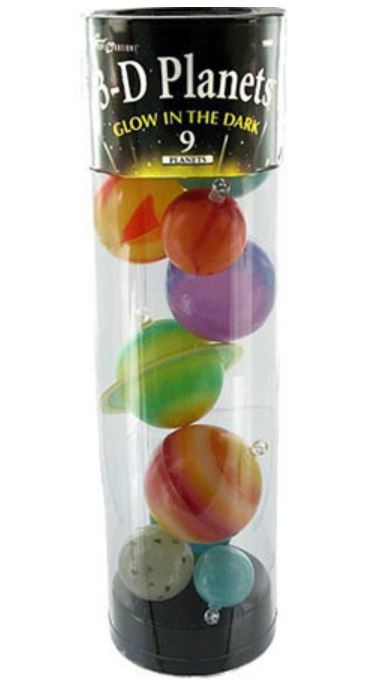 Produced by Fat Brain Toys
$8.45. www.fatbraintoys.com This set of nine glow-in-the-dark celestial bodies can be hung from your ceiling in perfect orbital order using the 25 feet of string and adhesive putty that is included. Then switch off the lights, and suddenly they all glow beautifully brilliant and bright! This set encourages an interest in space exploration and astronomy […]

Apollo: A Game Inspired by the Moon Missions 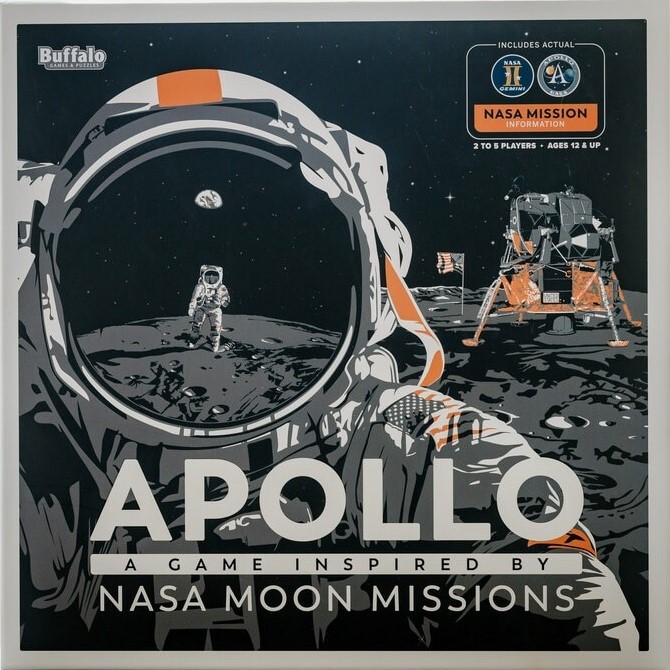 Produced by Buffalo Games & Puzzles
$29.99. www.buffalogames.com Apollo is a cooperative strategy game inspired by the NASA Moon missions. Walk in the footsteps of NASA’s pioneers and embark on the missions that made history. Play as a mission controller or as an astronaut. Both sides must work together and strategize to complete flight stages, overcome obstacles, repair the spacecraft, and […]
Note:  Product descriptions are taken from publishers' websites. LPI is not responsible for factual content.