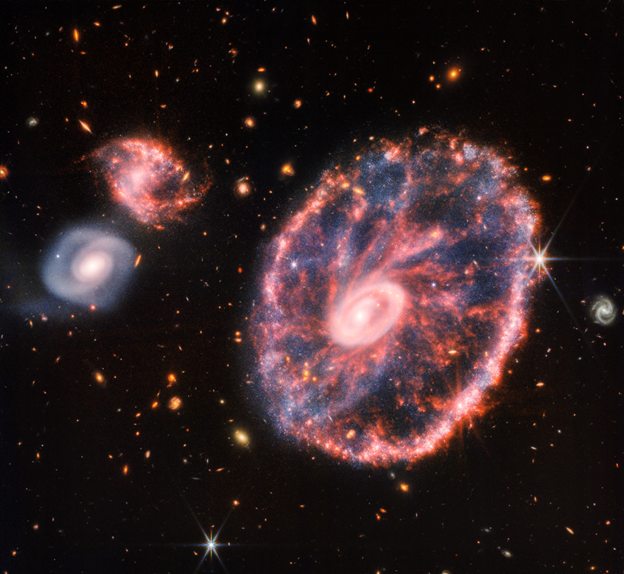 NASA’s James Webb Space Telescope has peered into the chaos of the Cartwheel Galaxy, revealing new details about star formation and the galaxy’s central black hole. Webb’s powerful infrared gaze produced a detailed image of the Cartwheel and two smaller companion galaxies against a backdrop of many other galaxies. This image provides a new view […] 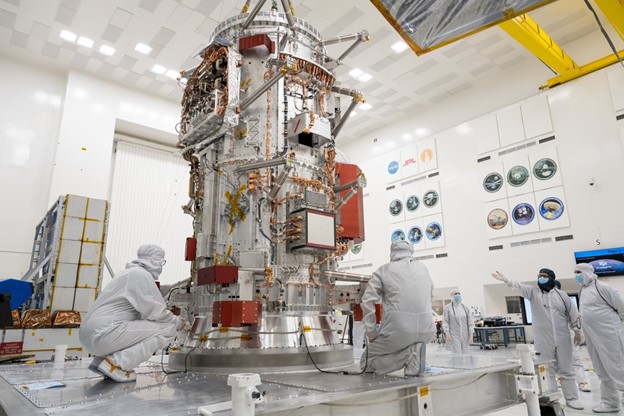 The core of NASA’s Europa Clipper spacecraft has taken center stage in the Spacecraft Assembly Facility at the agency’s Jet Propulsion Laboratory (JPL) in Southern California. Standing 3 meters (10 feet) high and 1.5 meters (5 feet) wide, for the next two years the spacecraft’s main body will be the focus of attention in the […]

NASA Identifies Candidate Regions for Landing Next Americans on Moon 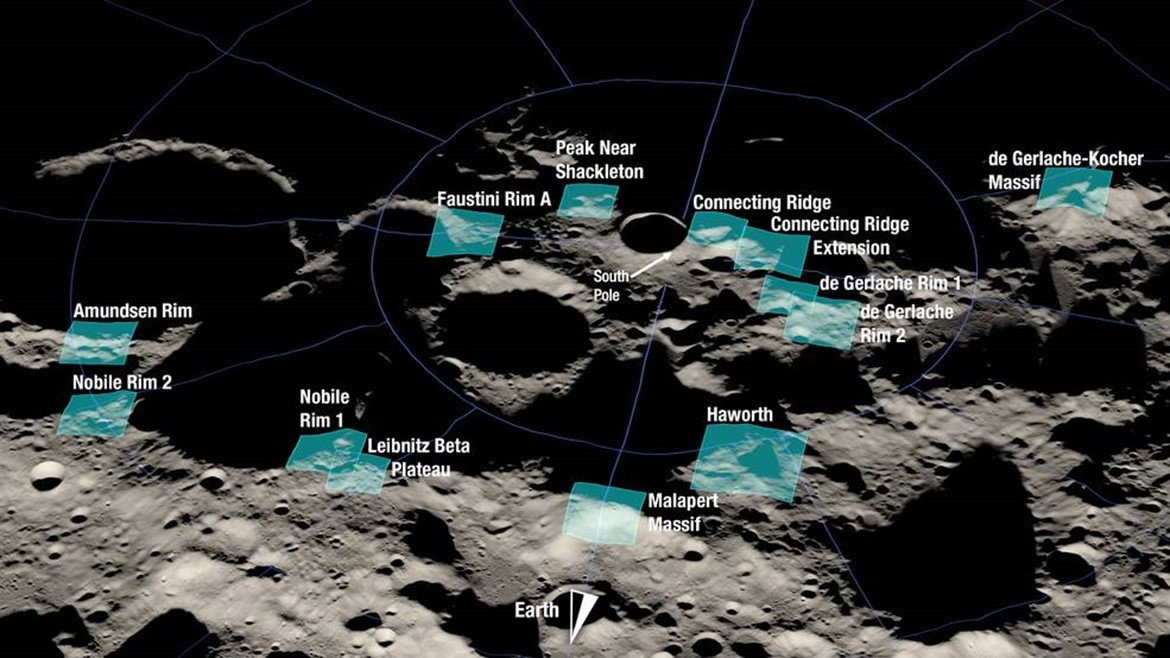 As NASA prepares to send astronauts back to the Moon under Artemis, the agency has identified 13 candidate landing regions near the lunar South Pole. Each region contains multiple potential landing sites for Artemis III, which will be the first of the Artemis missions to bring crew to the lunar surface, including the first woman […] 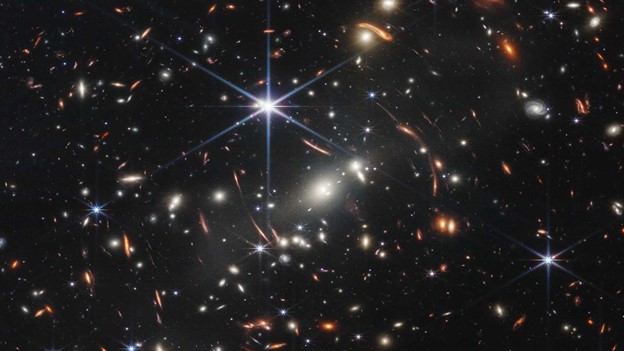 Could one of the biggest puzzles in astrophysics be solved by reworking Albert Einstein’s theory of gravity? A new study co-authored by NASA scientists says not yet. The universe is expanding at an accelerating rate, and scientists don’t know why. This phenomenon seems to contradict everything researchers understand about gravity’s effect on the cosmos. It’s […] 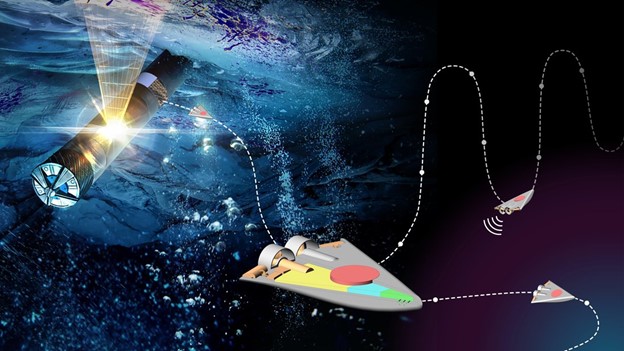 Some day, a swarm of cellphone-sized robots could whisk through the water beneath the kilometers-thick icy shell of Jupiter’s moon Europa or Saturn’s moon Enceladus, looking for signs of alien life. Packed inside a narrow ice-melting probe that would tunnel through the frozen crust, the tiny robots would be released underwater, swimming far from their […] 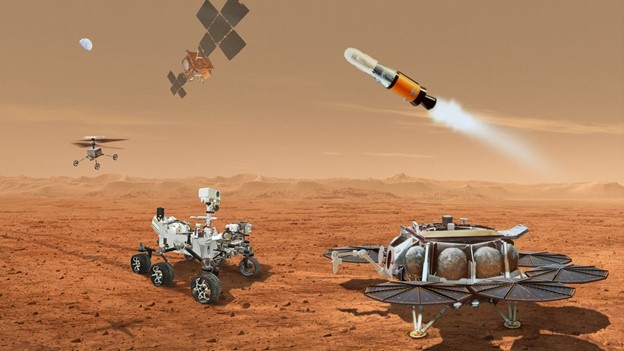 NASA has finished the system requirements review for its Mars Sample Return Program, which is nearing completion of the conceptual design phase. During this phase, the program team evaluated and refined the architecture to return the scientifically selected samples, which are currently in the collection process by NASA’s Perseverance rover in the Red Planet’s Jezero […]

NASA Helps Decipher How Some Distant Planets Have Clouds of Sand 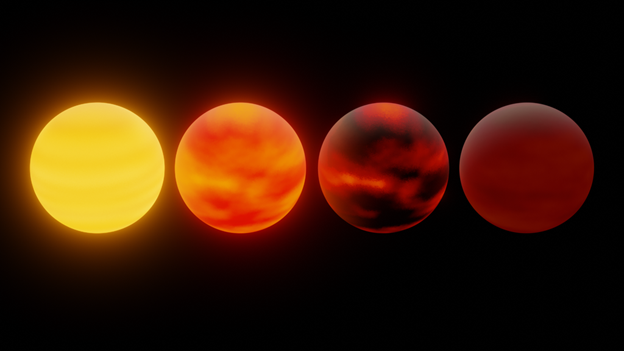 A new study using archival observations by the now-retired Spitzer Space Telescope found a common trait among distant worlds where exotic clouds form. Most clouds on Earth are made of water, but beyond our planet they come in many chemical varieties. The top of Jupiter’s atmosphere, for example, is blanketed in yellow-hued clouds made of […] 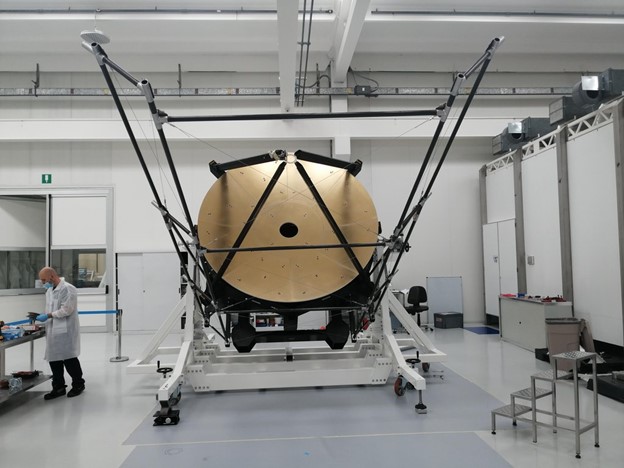 Telescopes designed to operate in space have to be constructed differently than those meant to operate on the ground. But what about telescopes that operate in between? An upcoming NASA mission will use a balloon larger than a football field to send a telescope 40,000 meters (about 130,000 feet) above Antarctica. From that height, the […] 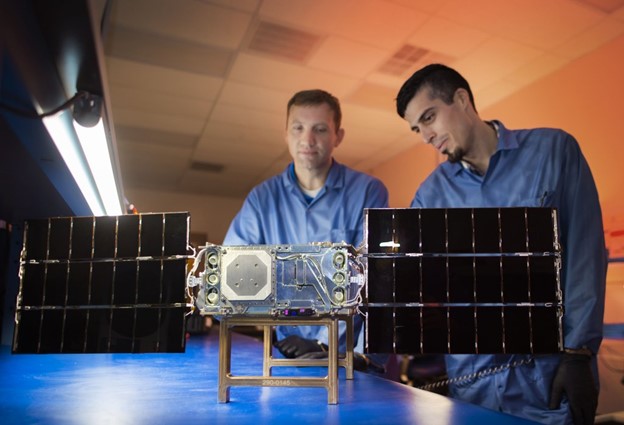 Building a 10-kilometer-wide (6-mile-wide) telescope in space may sound like science fiction. But through the combined power of six toaster-sized satellites, that’s what NASA’s SunRISE will be, a huge radio telescope in orbit that will help deepen scientists’ understanding of explosive space weather events. These phenomena generate particle radiation that can jeopardize astronauts and technology […]

Giant Impact Could Have Formed the Moon More Rapidly

Scientists from Durham University’s Institute for Computational Cosmology used the most detailed supercomputer simulations yet to reveal an alternative explanation for the Moon’s origin, with a giant impact immediately placing a Moon-like body into orbit around Earth. The research team included scientists at NASA Ames Research Center and the University of Glasgow, and their simulation […]