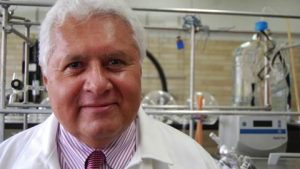 Dr. Rafael Navarro-González, chemist and astrobiologist, passed away on January 27, 2021, from complications with COVID-19. A tribute to Rafael will be scheduled at a later time when COVID-19 is a lower risk. Rafael was a talented and internationally recognized scientist. He was the recipient of the 2009 Alexander von Humboldt Medal, the World Academy of Sciences Award in Earth Sciences, and the first recipient of the Molina fellowship. His research blended laboratory simulations, fieldwork, and theoretical modeling in chemistry, physics, and biology. He identified the role of volcanic lightning in the origin of life on Earth.

Rafael Navarro-González was born in Mexico City on April 25, 1959. He earned a bachelor’s in biology from the National Autonomous University of Mexico (UNAM) and a PhD in Chemistry from the University of Maryland at College Park. Dr. Navarro-González established the Laboratory of Plasma Chemistry and Planetary Studies of the Institute of Nuclear Science at UNAM. Among the most significant of his contributions is the detection of organics in Mars-like environments on Earth. He was a Co-I on the SAM instrument onboard NASA’s Mars Science Laboratory and on the HABIT instrument onboard ESA’s ExoMars mission.