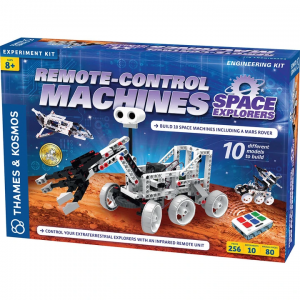 With this 256-piece engineering kit, you can build a remote-controlled model of a robotic rover resembling the ones used to explore Mars. The remote can control up to three motors, which move the rover back and forth, turn the wheels to steer the rover, and control the robotic arm to pick up specimens like small rocks. The set includes instructions to build not only the robot rover, but nine additional space-themed models as well, including a lunar rover, rocket-launcher car, space shuttle with opening cargo bay doors, robotic space shuttle payload arm, space droid, walking bot, space probe, cross-wing starship, and spaceship controller. Kids will be inspired to learn STEM skills through fun, hands-on construction projects that bridge two captivating interest areas: robots and outer space. A full-color, 80-page step-by-step illustrated manual helps kids assemble the models and teaches them about real-world examples of the robots, vehicles, and devices they are creating. It includes technical features of the Mars Curiosity rover and the history of Mars exploration, robotics in space probes, deep-space exploration, and the robots in popular space-related science fiction. For ages 8 and up.