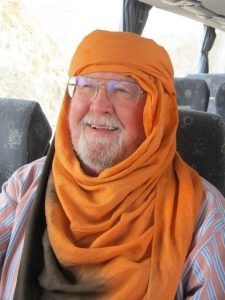 Our colleague, friend, and long-time member of The Meteoritical Society, Richard (Dick) Pugh passed away peacefully in his home on June 15 from complications associated with liver failure.

Pugh was a long-time meteorite enthusiast and educator and the heart of the Cascadia Meteorite Laboratory (CML) at Portland State University. Pugh received both his B.S. and his M.S.T. in physical science from Portland State University. While a student, he worked with Erwin F. Lange on meteorites and meteorite education. From 1968 to 1999, Pugh taught science classes at Cleveland High School in Portland, where he was widely known by students as an excellent and challenging teacher who inspired a love of science and meteorites.

During the years that Pugh taught at Cleveland High School, he followed in the footsteps of his mentor, Lange. Pugh spent decades giving lectures, talks, and demonstrations about meteorites, astronomy, and geology to children and adults in grade schools, high schools, colleges, universities, and clubs in Oregon, Washington, Nevada, California, and Montana.

Pugh examined thousands to him by the public. Most were “meteor-wrongs,” but a few were bona fide meteorites, and Pugh contacted and worked with various meteorite scientists to get these analyzed and published, including the Salem chondrite and the Study Butte chondrite.

Pugh rediscovered the location in West Linn where the Willamette meteorite had been found, and realized that it was on the “strand line” from the ice age floods. He published a paper with PSU geologist John Eliot Allen suggesting that the Willamette had fallen in Canada and been rafted to Oregon by one of the ice age floods. Pugh also published numerous reports of fireballs over the Pacific Northwest.

Between 2003 and 2020, Pugh served as an integral part of CML. He started the E. F. Lange Endowment in 2005, which supports the activities of CML, in honor of his former advisor. Pugh purchased and donated hundreds of meteorite samples to the CML collection. He also helped prepare meteorite samples for classification, including two from Oregon (the Morrow County chondrite and the Fitzwater Pass iron meteorite).

From 2003 to 2015, Pugh drove tens of thousands of miles (this is not an exaggeration; he kept detailed records) to speak to thousands of people as part of three consecutive NASA Education/Public Outreach Grants. After the grants ended, Pugh continued to drive around the Pacific Northwest doing public outreach funded using donations to CML.

Pugh received the Service Award of the Meteoritical Society at the 2011 MetSoc meeting in Greenwich, England. This award “honors members who have advanced the goals of the Society to promote research and education in meteoritics and planetary science in ways other than by conducting scientific research. In 2011, Pugh also received the Duane Marshall Special Service to Education Award from the Oregon Science Teachers Association and was recognized as a Sigma Xi Distinguished Member.

His enthusiasm for meteorites was infectious, his world both that of the researcher and teachable layperson. He will be missed, but memories of him will live on and inspire.