Robot Spelunkers Go for a Dip 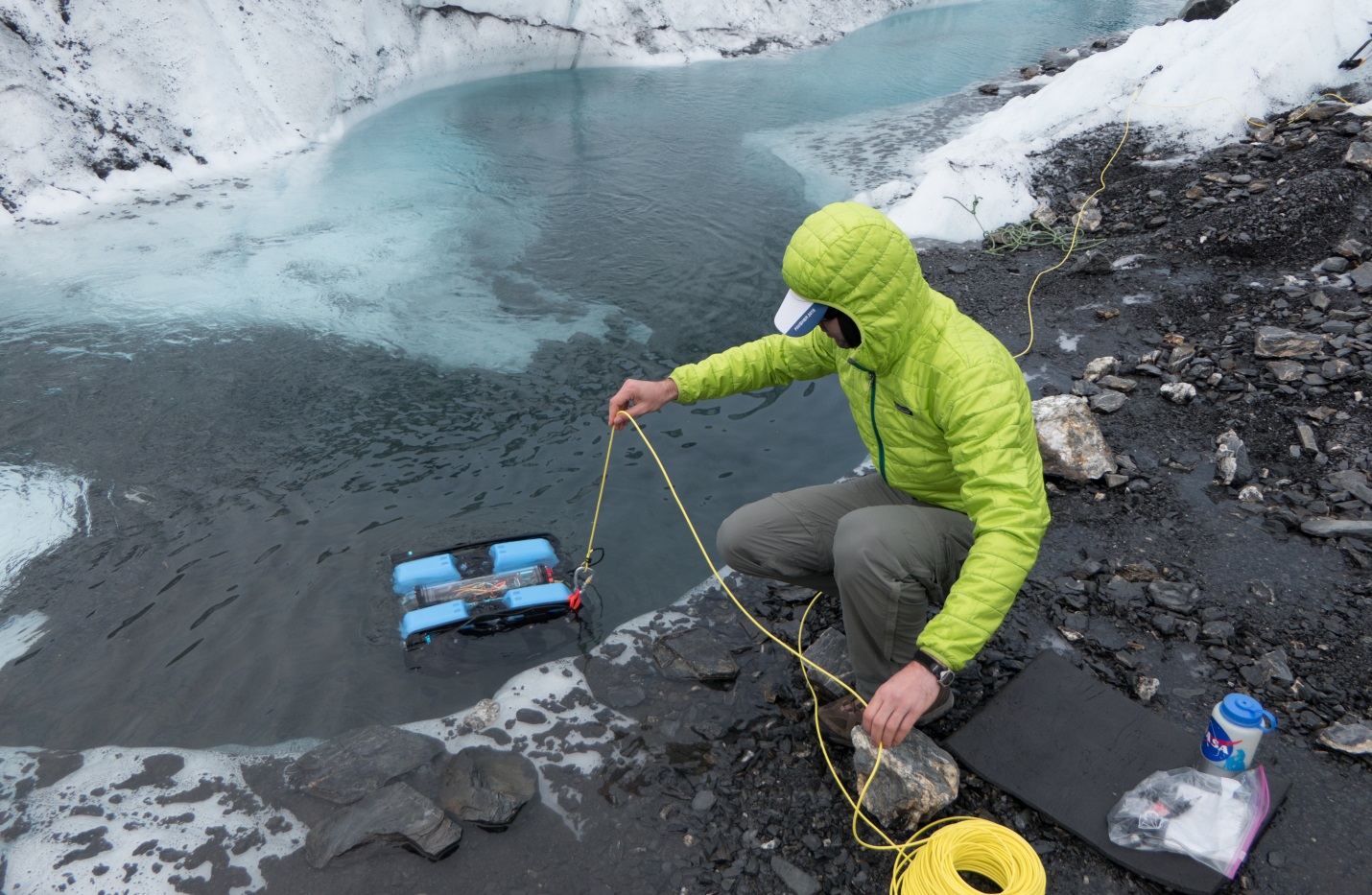 JPL engineer Andy Klesh lowers a robotic submersible into a moulin. Klesh and JPL’s John Leichty used robots and probes to explore the Matanuska Glacier in Alaska this past July. Credit: NASA/JPL-Caltech.

NASA has changed the perspective of science, building satellites to study Earth’s surface. Deep below that surface, where it’s harder for satellites to see, is another story — but robotic technology might change that.

NASA roboticists are exploring moulins, places where water has punched through thousands of feet of ice to form a waterfall through a glacier. They hope to match these watery labyrinths to features that can be surveyed by satellite, such as openings in the glacier’s surface. This past July, two researchers from NASA’s Jet Propulsion Laboratory in Pasadena, California, traveled by plane to Alaska’s Matanuska Glacier. There, they tested robotic mapping techniques while exploring these icy labyrinths.

Moulins are too small and dangerous for humans to enter, so the best way to explore them is with robotic submersibles. NASA has been interested in these flooded structures in the past because they serve as a glacier’s “plumbing,” carrying meltwater throughout the ice and controlling how fast a glacier moves.

In the distant future, understanding ice formations like moulins might help with deep space exploration. They could provide entrances into icy worlds like Jupiter’s moon Europa.

“To get under the surface of Europa or [Saturn’s moon] Enceladus, we need to find the quickest way in,” said Andy Klesh of JPL, one of the researchers who ventured out to Matanuska Glacier. “Can we map and navigate these subglacial lakes with robots? Are there accessible passageways hidden just beneath the surface? This first foray to Alaska tested the technology to begin answering these questions.”

Klesh was joined by John Leichty, another JPL roboticist, and a guide named Keeton Kroon. They flew in a two-seater plane and backpacked to their field sites over the course of six days.

The field site was as remote as it was visually stunning, Klesh said. They were completely alone, save for a couple of bears they encountered and the occasional passing plane. At one point they came across an “ice fence” — a set of 2-meter-tall (7-foot-tall) ice pillars that included a heart-shaped hole. One of them photographed it; the next day, they passed by and the shape had completely melted away.

“The terrain changes daily,” Klesh said. “Because of the way everything melts out there, you’re the first — and maybe the last — to see it.”

At each moulin, streams of blue water emptied into pools on the surface. This liquid water is warmer than the ice, melting into it and carving different formations. Some of it melts all the way into the glacier, creating a network of underwater passages.

The team lowered a robotic submersible into these moulins, which descended to 46 meters (150 feet) at one point. Klesh said they could have descended farther, but the water became too cloudy to keep going. Underwater cameras recorded their passage; in the future, they plan to use acoustic sensors to map out surroundings when it becomes too dirty to see.

“The idea is to identify and map out these underwater channels,” Leichty said. “We want to know if they’re correlated to surface features that we can identify using satellite or overhead images.”

Understanding the relationship between the worlds above and below will let scientists guess where to lower probes to gather the best science.

Klesh and Leicty’s recent expedition relied on a commercial grade submersible and a “homemade” glacial probe. The latter was built using off-the-shelf and three-dimensional printed parts. They did all their own wiring and programming.

They said their experience with CubeSats — tiny, modular spacecraft that rely heavily on commercial parts — helped them create this probe. Both Klesh and Leichty are involved with another icy, underwater project called BRUIE (Buoyant Rover for Under-Ice Exploration). BRUIE has been tested under Alaskan ice in the past, and prepared them for the challenges of working on the Matanuska Glacier. Pro tip:  Bring small handpicks to chip out ice that freezes in your robot’s bolts and prevents you from tightening them.

“We’re combining our experience with BRUIE and CubeSats and bringing that into a new area of exploration,” Klesh said. “CubeSats rely on the miniaturization of electronics to explore low-cost platforms. That allows us to explore areas that would otherwise be too risky or costly to access.”

This trial run of moulin mapping was just a start. Klesh and Leichty are roboticists, so their focus is developing the right technology. They want to partner with scientists for a more detailed exploration of moulins next summer.