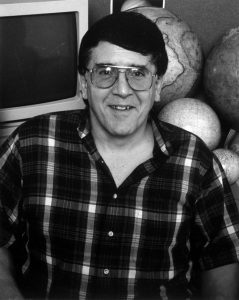 Roger Jay Phillips, American geophysicist, planetary scientist, and professor emeritus at Washington University in St. Louis, passed away on November 19, 2020. Phillips served as the Director of the Lunar and Planetary Institute (LPI) from 1979 to 1982.

Phillips received his Ph.D. in 1968 from the University of California, Berkeley. Following graduate school, he worked at the Jet Propulsion Laboratory (JPL) before joining the staff of the LPI in 1979. In 1982, Phillips accepted a chaired faculty position at Southern Methodist University, and in 1992 he moved to Washington University in St. Louis, where he served as a Professor and as Director of the McDonnell Center for the Space Sciences. After retiring from Washington University, Phillips moved to Colorado, where he was affiliated with the Southwest Research Institute.

Over a career that spanned more than five decades, Phillips contributed broadly to our understanding of the geophysical structure and evolution of the Moon, Mars, Venus, and Mercury. He was the team leader for the Apollo Lunar Sounder Experiment, which flew on Apollo 17 and produced the first radar imaging of the lunar subsurface. Much later, he was team co-leader for the Shallow Radar (SHARAD) experiment on the Mars Reconnaissance Orbiter that imaged the internal stratigraphy of martian polar layered deposits and other terrains. He also played key roles on the science teams for the Magellan mission to Venus, the Mars Global Surveyor (MGS) mission, the MESSENGER mission to orbit Mercury, and the GRAIL mission to the Moon.

In some of his earliest work, Phillips analyzed planetary gravity fields derived from spacecraft tracking observations, along with available information on topography, to infer planetary internal structure. He demonstrated that the positive gravity anomaly over lunar mascon basins arises from a combination of mantle uplift beneath the basin and infill by high-density mare basalt. He derived some of the earliest crustal models for Mars and concluded that the ancient uplands are isostatically compensated, most likely by variations in crustal thickness. From Pioneer Venus observations, he showed that long-wavelength gravity and topography on Venus are strongly correlated, implying some combination of mantle dynamic control and finite lithospheric strength, except that crustal plateaus appear to be compensated at shallow depth, probably by thicker than average crust.

Phillips led the documentation of the impact cratering record of Venus from Magellan observations, and he elucidated the relation between the crater distribution and the planet’s resurfacing history. Through a series of dynamical models and simulations, he illuminated the role of mantle convection in the evolution of volcanism and tectonics on Venus. Following the acquisition by MGS of global topography and gravity field data for Mars, he demonstrated that the growth of the huge Tharsis volcanic province shaped the entire planet and influenced the distribution and direction of martian valley networks. From SHARAD profiles, he showed that the lithosphere of the martian polar regions is minimally deflected by the substantial load of the polar deposits, a condition indicative of a large lithosphere thickness or a long-term transient mantle response to loading.

A fellow of the American Geophysical Union, Phillips received the 2003 G. K. Gilbert Award from the Geological Society of America. He was also honored with the Whipple Award from the American Geophysical Union in 2008. Among his many contributions to the scientific literature, Phillips served as an editor of Geophysical Research Letters and co-edited the books Basaltic Volcanism on the Terrestrial Planets, Origin of the Moon, and Venus II.