Saturn’s Tilt Caused by Its Moons 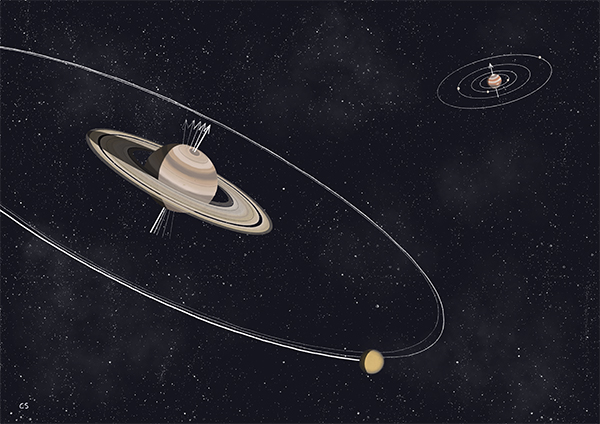 Artist’s impression of the migration of Titan and the tilt of Saturn. Credit:  Coline SAILLENFEST/IMCCE.

Two scientists from the Centre National de Recherche Scientifique (CNRS) and Sorbonne University working at the Institute of Celestial Mechanics and Ephemeris Calculation (Paris Observatory – PSL/CNRS) have just shown that the influence of Saturn’s satellites can explain the tilt of the rotation axis of the gas giant. Their work, published on January 18, 2021, in the journal Nature Astronomy, predicts that the tilt will increase even further over the next few billion years.

The conclusion of recent work carried out by scientists from the CNRS, Sorbonne University, and the University of Pisa shows that Saturn’s tilt may be caused by its moons, finding that the current tilt of Saturn’s rotation axis is caused by the migration of its satellites, and especially by that of its largest moon, Titan.

Recent observations have shown that Titan and the other moons are gradually moving away from Saturn much faster than astronomers had previously estimated. By incorporating this increased migration rate into their calculations, the researchers concluded that this process affects the inclination of Saturn’s rotation axis — as its satellites move further away, the planet tilts more and more.

The decisive event that tilted Saturn is thought to have occurred relatively recently. For over three billion years after its formation, Saturn’s rotation axis remained only slightly tilted. It was only roughly a billion years ago that its satellites’ gradual motion triggered a resonance phenomenon that continues today — Saturn’s axis interacted with Neptune’s path and gradually tilted until it reached the inclination of 27 degrees that is observed today.

These findings call into question previous scenarios. Astronomers were already in agreement about the existence of this resonance. However, they believed that it had occurred very early on, over four billion years ago, due to a change in Neptune’s orbit. Since that time, Saturn’s axis was thought to have been stable. Saturn’s axis is still tilting, and what we see today is merely a transitional stage in this shift. Over the next few billion years, the inclination of Saturn’s axis could more than double.

The research team had already reached similar conclusions about the planet Jupiter, which is expected to undergo comparable tilting due to the migration of its four main moons and resonance with Uranus’s orbit. Over the next five billion years, the inclination of Jupiter’s axis could increase from 3 degrees to more than 30 degrees.