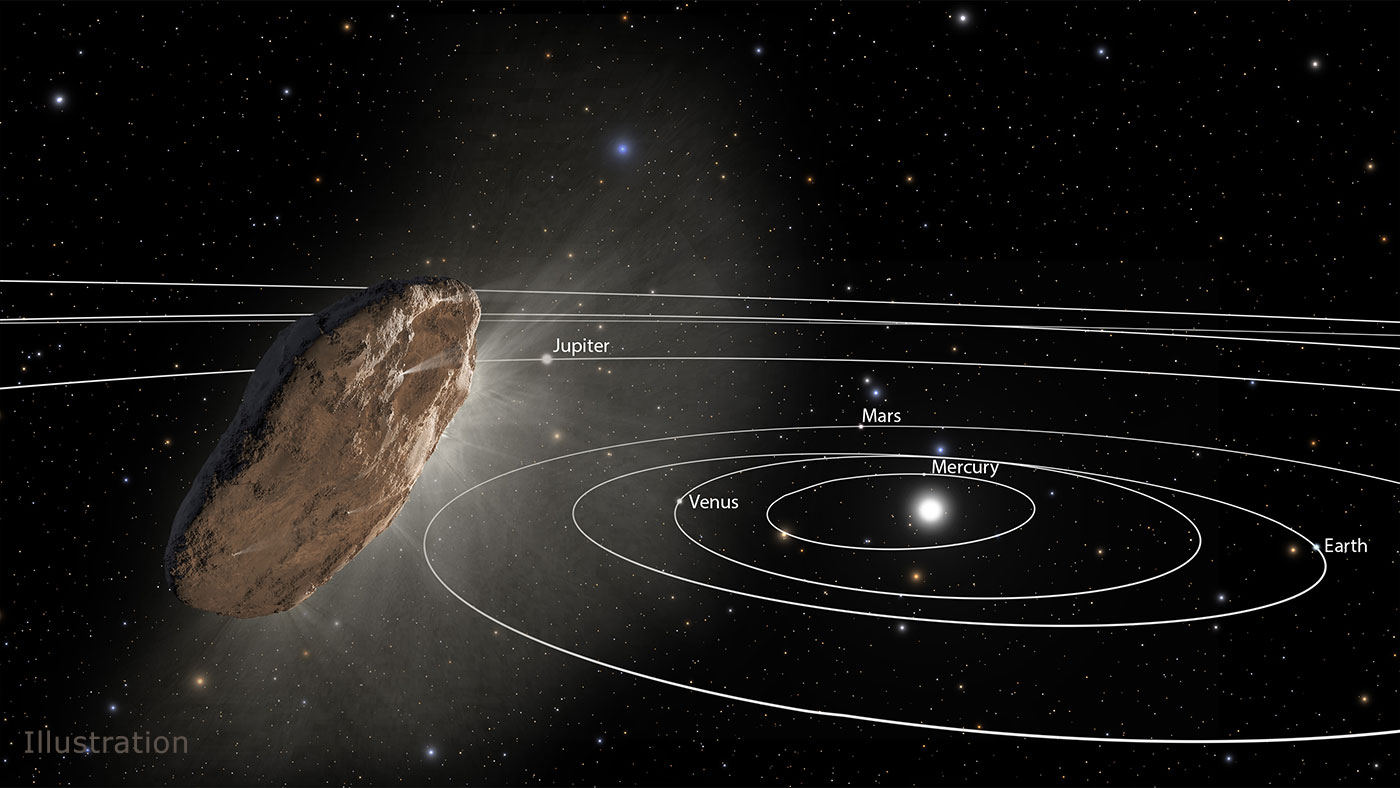 This artist’s illustration shows ‘Oumuamua racing toward the outskirts of our solar system, and is annotated with the locations of the planetary orbits. As the complex rotation of the object makes it difficult to determine the exact shape, there are many models of what it could look like. Credit: NASA/JPL-Caltech.

Using observations from NASA’s Hubble Space Telescope and groundbased observatories, an international team of scientists has confirmed ‘Oumuamua (oh-MOO-ah-MOO-ah), the first known interstellar object to travel through our solar system, got an unexpected boost in speed and shift in trajectory as it passed through the inner solar system last year.

“Our high-precision measurements of ‘Oumuamua’s position revealed that there was something affecting its motion other than the gravitational forces of the Sun and planets,” said Marco Micheli of ESA’s (European Space Agency) Space Situational Awareness Near-Earth Object Coordination Centre in Frascati, Italy, and lead author a paper describing the team’s findings.

Analyzing the trajectory of the interstellar visitor, co-author Davide Farnocchia of the Center for Near Earth Object Studies (CNEOS) at NASA’s Jet Propulsion Laboratory, Pasadena, California, found that the speed boost was consistent with the behavior of a comet.

“This additional subtle force on ‘Oumuamua likely is caused by jets of gaseous material expelled from its surface,” said Farnocchia. “This same kind of outgassing affects the motion of many comets in our solar system.”

Comets normally eject large amounts of dust and gas when warmed by the Sun. But according to team scientist Olivier Hainaut of the European Southern Observatory, “There were no visible signs of outgassing from ‘Oumuamua, so these forces were not expected.”

The team estimates that ‘Oumuamua’s outgassing may have produced a very small amount of dust particles — enough to give the object a little kick in speed, but not enough to be detected.

Karen Meech, an astronomer at the University of Hawaii’s Institute of Astronomy and co-author of the study, speculated that small dust grains, present on the surface of most comets, eroded away during ‘Oumuamua’s long journey through interstellar space.

“The more we study ‘Oumuamua, the more exciting it gets,” Meech said. “I’m amazed at how much we have learned from a short, intense observing campaign. I can hardly wait for the next interstellar object!”

‘Oumuamua, less than half a mile in length, now is farther away from our Sun than Jupiter and traveling away from the Sun at about 113,000 kilometers (70,000 miles) per hour as it heads toward the outskirts of the solar system. In only another four years, it will pass Neptune’s orbit on its way back into interstellar space.

Because ‘Oumuamua is the first interstellar object ever observed in our solar system, researchers caution that it’s difficult to draw general conclusions about this newly-discovered class of celestial bodies. However, observations point to the possibility that other star systems regularly eject small comet-like objects, and there should be more of them drifting among the stars. Future ground- and spacebased surveys could detect more of these interstellar vagabonds, providing a larger sample for scientists to analyze.