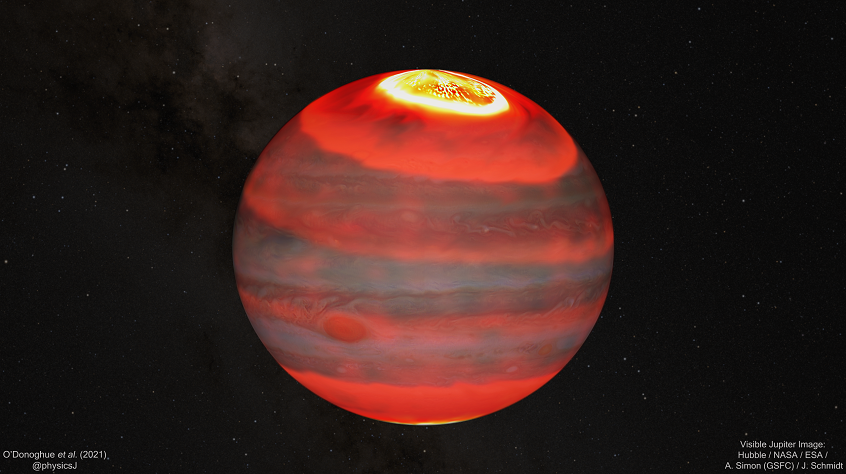 Jupiter is shown in visible light for context underneath an artistic impression of the jovian upper atmosphere’s infrared glow. The brightness of this upper atmosphere layer corresponds to temperatures, from hot to cold, in this order: white, yellow, bright red, and lastly, dark red. The aurorae are the hottest regions, and the image shows how heat may be carried by winds away from the aurora and cause planet-wide heating. Credit: J. O’Donoghue (JAXA)/Hubble/NASA/ESA/A. Simon/J. Schmidt.

New research published in Nature has revealed the solution to Jupiter’s energy crisis, which has puzzled astronomers for decades.

Space scientists at the University of Leicester worked with colleagues from the Japan Aerospace Exploration Agency (JAXA), Boston University, NASA Goddard Space Flight Center, and the National Institute of Information and Communications Technology (NICT) to reveal the mechanism behind Jupiter’s atmospheric heating.

Now, using data from the Keck Observatory in Hawaii, astronomers have created the most detailed yet global map of the gas giant’s upper atmosphere, confirming for the first time that Jupiter’s powerful aurorae are responsible for delivering planet-wide heating.

Dr. James O’Donoghue is a researcher at JAXA and completed his Ph.D. at Leicester. He is the lead author for the research paper.

O’Donoghue said, “We first began trying to create a global heat map of Jupiter’s uppermost atmosphere at the University of Leicester. The signal was not bright enough to reveal anything outside of Jupiter’s polar regions at the time, but with the lessons learned from that work, we managed to secure time on one of the largest, most competitive telescopes on Earth some years later.”

He continued, “Using the Keck telescope, we produced temperature maps of extraordinary detail. We found that temperatures start very high within the aurora, as expected from previous work, but now we could observe that Jupiter’s aurora, despite taking up less than 10% of the area of the planet, appear to be heating the whole thing. This research started in Leicester and carried on at Boston University and NASA before ending at JAXA in Japan. Collaborators from each continent working together made this study successful, combined with data from NASA’s Juno spacecraft in orbit around Jupiter and JAXA’s Hisaki spacecraft, an observatory in space.”

Dr. Tom Stallard and Dr. Henrik Melin are part of the School of Physics and Astronomy at the University of Leicester.

Dr. Stallard added, “There has been a very long-standing puzzle in the thin atmosphere at the top of every giant planet within our solar system. With every Jupiter space mission, along with groundbased observations, over the past 50 years, we have consistently measured the equatorial temperatures as being much too hot. This ‘energy crisis’ has been a long-standing issue — do the models fail to properly model how heat flows from the aurora, or is there some other unknown heat source near the equator? This paper describes how we have mapped this region in unprecedented detail and have shown that, at Jupiter, the equatorial heating is directly associated with auroral heating.”

Aurorae occur when charged particles are caught in a planet’s magnetic field. These spiral along the field lines toward the planet’s magnetic poles, striking atoms and molecules in the atmosphere to release light and energy.

On Earth, this leads to the characteristic light show that forms the Aurora Borealis and Australis. At Jupiter, the material spewing from its volcanic moon, Io, leads to the most powerful aurora in the solar system and enormous heating in the planet’s polar regions.

Although the jovian aurorae have long been a prime candidate for heating the planet’s atmosphere, observations have previously been unable to confirm or deny this until now.

Previous maps of the upper atmospheric temperature were formed using images consisting of only several pixels. This is not enough resolution to see how the temperature might be changed across the planet, providing few clues as to the origin of the extra heat.

The team scoured more than 10,000 individual data points, only mapping points with an uncertainty of less than 5%.

Models of the atmospheres of gas giants suggest that they work like a giant refrigerator, with heat energy drawn from the equator toward the pole and deposited in the lower atmosphere in these pole regions.

These new findings suggest that fast-changing aurorae may drive waves of energy against this poleward flow, allowing heat to reach the equator.

Planetary research at the University of Leicester spans the breadth of the jovian system, from the planet’s magnetosphere and atmosphere to its diverse collection of satellites.

Leicester researchers are members of the Juno mission, a global team of astronomers observing the giant planet and leading Jupiter observations from the forthcoming James Webb Space Telescope. Leicester also plays a leading role in science and instrumentation on the European Space Agency (ESA)’s JUpiter ICy moons Explorer (JUICE), due for launch in 2022.

“Global upper-atmospheric heating on Jupiter by the polar aurorae” is available in the August 2021 issue of Nature.