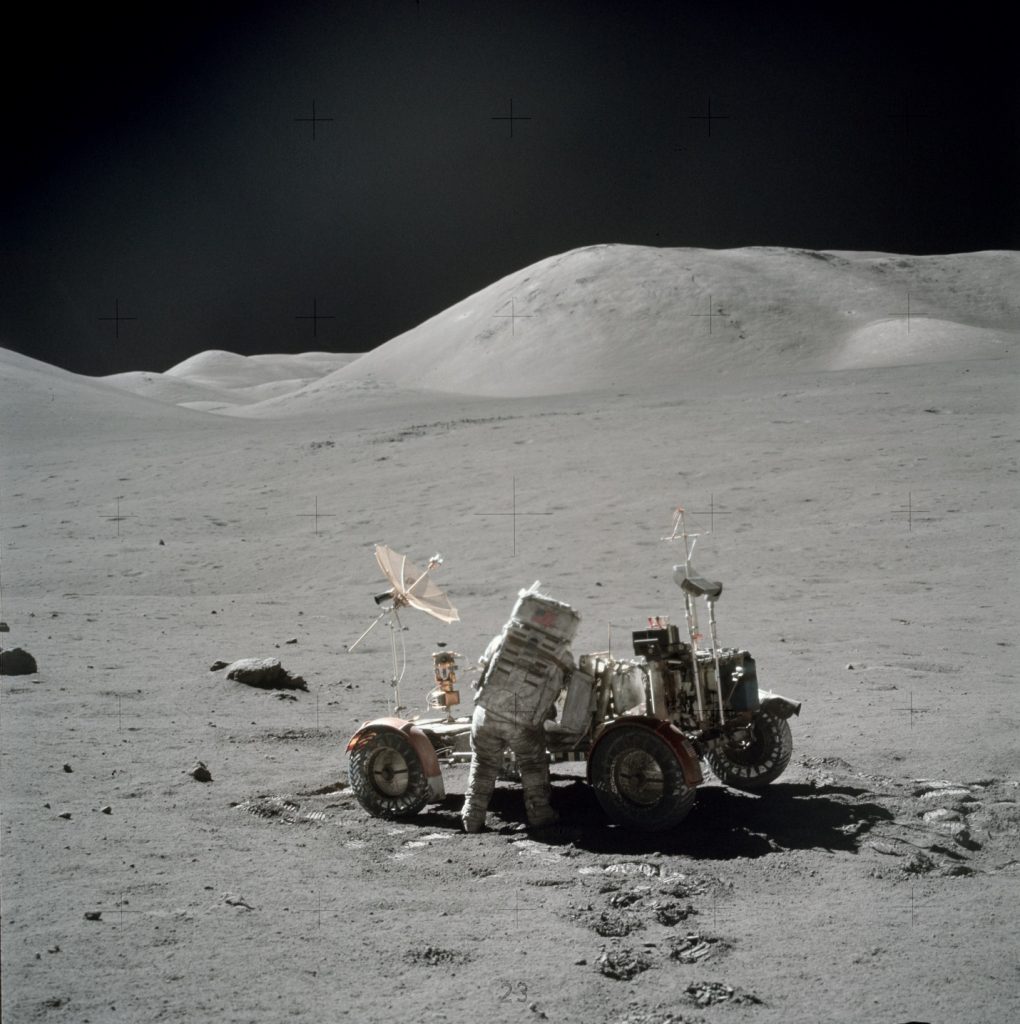 Harrison “Jack” Schmitt was the only geologist to walk on the Moon. Some of the samples he collected have been preserved for nearly 50 years and are now being studied with modern sample analysis techniques. Credit:  NASA.

Humans have not set foot on the Moon for nearly 50 years, but the Apollo Moon missions aren’t over. The echoes from Neil Armstrong’s first steps are still helping scientists make giant leaps in understanding the Moon’s geology.

When the Apollo 17 astronauts packed up for home in 1972, they brought rock samples with them. NASA locked many of the rocks and core samples away in a vault, awaiting technological innovations that would allow future scientists to study them better than 1970s technology allowed.

Now, Purdue University scientists Michelle Thompson and Marc Caffee are working on teams that will analyze some of the Moon rocks and lunar soil samples from that mission. Thompson is an assistant professor of Earth, Atmospheric, and Planetary Sciences in Purdue’s College of Science. Caffee is a professor of Physics and Astronomy with a courtesy appointment in the Department of Astronomy and Physics.

Thompson and her team are partnering with some of the original scientists, including Harrison “Jack” Schmitt, the first and only geologist ever to walk on the Moon, to learn more about the Moon itself through the rock samples.

“When these samples were collected, when men walked on the Moon, I hadn’t even been born yet,” Thompson said. “This sample has been on Earth longer than I have. It has been sitting in storage, waiting for scientists to analyze it since it was returned. Scientists now have tools and technologies that the original generation of astronauts could only dream of. So now it’s our turn to follow in their footsteps and study the Moon rocks they brought back.”

The Apollo Next Generation Sample Analysis Program (ANGSA) is only possible because much of the more than 381 kilograms (840 pounds) of Moon rocks and dust has been kept pristine for nearly half a century. Now, scientists believe they have even better tools that are more sensitive, allowing them to study the samples comprehensively.

Thompson is an expert in the way rocks interact with and change due to their exposure to the vacuum of space — a phenomenon called space weathering. Analyzing the chemistry of Moon rocks and Moon dust can tell her about the environment, evolution, and history of the Moon.

Thompson is studying a lunar core sample, a small column of Moon dust extracted from the lunar surface by Apollo 17 astronauts Schmitt and Eugene Cernan, a Purdue alum. It comes from a part of the Moon that may have experienced an avalanche, giving even deeper insight into the distribution of minerals and the chemistry of the Moon. Thompson is hoping that they will be able to understand what the surface of the Moon was like before and after the avalanche, gaining greater knowledge of how the Moon’s soil, or regolith, has developed over time.

The samples are tiny to the naked eye. Originally a column of dust about 60 centimeters (24 inches) long, the lunar core has been sealed in the same metal tube it was placed in after Cernan and Schmitt extracted it from the Moon. Thompson and her graduate student, James McFadden, traveled to NASA’s Johnson Space Center in Houston, where the sample is stored, to help safely separate the material into several smaller samples from different depths of the core.

Thompson and her team are analyzing the lunar dust, tiny grains of mineral that she describes as “sticking to absolutely everything.” Understanding the chemistry and structure of this material, which coats astronauts’ suits and vehicles as well as shelters and solar panels, will be vital for any long-term Moon base plans. The dust coats the lids of the sample containers and sticks to everything it touches. The only way to study it is through chemistry and studying its microstructure using tools including electron microscopes.

Caffee is studying another aspect of the lunar core sample in a joint project with the University of California, Santa Barbara. Researchers will dissolve minute quantities of the Moon dust and send elements isolated by this process to Caffee. Caffee will study radionuclides to determine how cosmic radiation has interacted with the Moon.

Cosmic rays permeate the whole galaxy; they are usually made up of protons accelerated in supernovae explosions. When these energetic cosmic rays collide with the elements comprising rocks or an atmosphere, they liberate a massive secondary cascade of particles that ultimately produce stable and radionuclides, referred to as cosmogenic nuclides. Cosmogenic nuclides occur in meteorites, lunar samples, and terrestrial rocks.

Although initially focused on exploration and testing technologies, much of the later research on the Moon related to geology and exploration of the Moon’s surface. The last lunar missions, Apollo 15, 16, and 17, all brought lunar rovers along to cover more area and get Moon rocks and regolith from different geographic regions. Apollo 17 put a geologist on the Moon.

“These astronauts, these guys were good,” Caffee said. “They were trained by geologists, and of course, Schmitt is a geologist. Having geologists on the lunar surface was extremely important because they recognized patterns and features. They were able to make informed decisions about where the best and most useful places to take samples would be. I think they recognized that this core was near a landslide, and we’re really curious to see what it looks like.”

Caffee had just started studying lunar geology after the Apollo missions returned to Earth. He recalls that early analysis of samples required a large amount of dust or rocks to get significant and accurate results.

“One of the reasons that they archived these cores is that 50 years after the missions were done, they knew we would have much better analytical techniques,” Caffee said. “Now we can get the same, or better, results using only milligrams of material, meaning we can do so much more research than they would have been able to using the same rocks.”