Take a Walk on Mars with Access Mars Experience 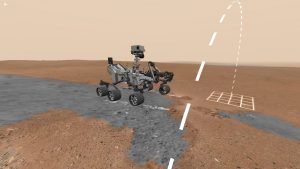 Access Mars allows any member of the public to explore the discoveries of NASA’s Curiosity rover. Credit:  NASA/JPL-Caltech.

When NASA scientists want to follow the path of the Curiosity rover on Mars, they can don a mixed-reality headset and virtually explore the martian landscape.

Now everyone can get a taste of what that feels like. NASA’s Jet Propulsion Laboratory (JPL) in Pasadena, California, collaborated with Google to produce Access Mars, a free immersive experience. It’s available for use on all desktop and mobile devices and virtual reality/augmented reality (VR/AR) headsets. That includes mobile-based virtual reality devices on Apple and Android.

Access Mars lets anyone with an Internet connection take a guided tour of what those scientists experience. A simple walkthrough explains what the Curiosity rover does and details its dramatic landing in 2012. Users also can visit four sites that have been critical to NASA’s Mars Science Laboratory mission:  Curiosity’s landing site, Murray Buttes, Marias Pass, and Pahrump Hills. Additionally, the rover’s latest location on lower Mt. Sharp will be periodically updated to reflect the mission’s ongoing progress.

Access Mars was created using data collected by JPL and built on WebVR, an open-source standard, in an effort to expand access to immersive experiences. Google’s Creative Labs team was looking for novel uses for VR and encouraged developers to experiment using its tools.