The Basic Calculus of Planetary Orbits and Interplanetary Flight:
The Missions of the Voyagers, Cassini, and Juno 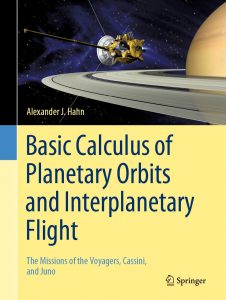 This textbook applies basic, one-variable calculus to analyze the motion both of planets in their orbits as well as interplanetary spacecraft in their trajectories. The remarkable spacecraft missions to the inner and outermost reaches of our solar system have been one of the greatest success stories of modern human history. Much of the underlying mathematical story is presented alongside the astonishing images and extensive data that NASA’s Voyager, NEAR-Shoemaker, Cassini, and Juno missions have sent back to us. First- and second-year college students in mathematics, engineering, or science, and those seeking an enriching independent study, will experience the mathematical language and methods of single variable calculus within their application to relevant conceptual and strategic aspects of the navigation of a spacecraft. The reader is expected to have taken one or two semesters of the basic calculus of derivatives, integrals, and the role that limits play. Additional prerequisites include knowledge of coordinate plane geometry, basic trigonometry, functions and graphs, including trig, inverse, exponential, and log functions. The discussions begin with the rich history of humanity’s efforts to understand the universe from the Greeks, to Newton and the Scientific Revolution, to Hubble and galaxies, to NASA and the space missions. The calculus of polar functions that plays a central mathematical role is presented in a self-contained way in complete detail. Each of the six chapters is followed by an extensive problem set that deals with and also expands on the concerns of the chapter.