The LPI’s First Billion Years initiative is designed to support an interdisciplinary study of planetary accretion, differentiation, bombardment, and habitability in a series of four topical conferences. The third installment in that series, Bombardment, investigated the range of collisional events that occurred after planetary accretion when an extended period of bombardment may have been punctuated by one or more bursts of activity. The largest impactors produced impact basins hundreds to thousands of kilometers in diameter, completely reshaping the surfaces of rocky and icy planets. These types of events were not unique to our solar system. Debris disks produced by similar processes have been observed around other stars after they emerged from their natal gas-rich nebulae and up to several hundred million years after they formed. Although the Moon was a central component of the conference due to its exquisitely preserved record, the discussion necessarily included observations elsewhere, such as on the Hadean Earth, Mars, the asteroid belt, outer solar system moons, and planetary systems elsewhere. Because the bombardment may have affected the origin and early evolution of life, discussion also drew on astrobiological findings. 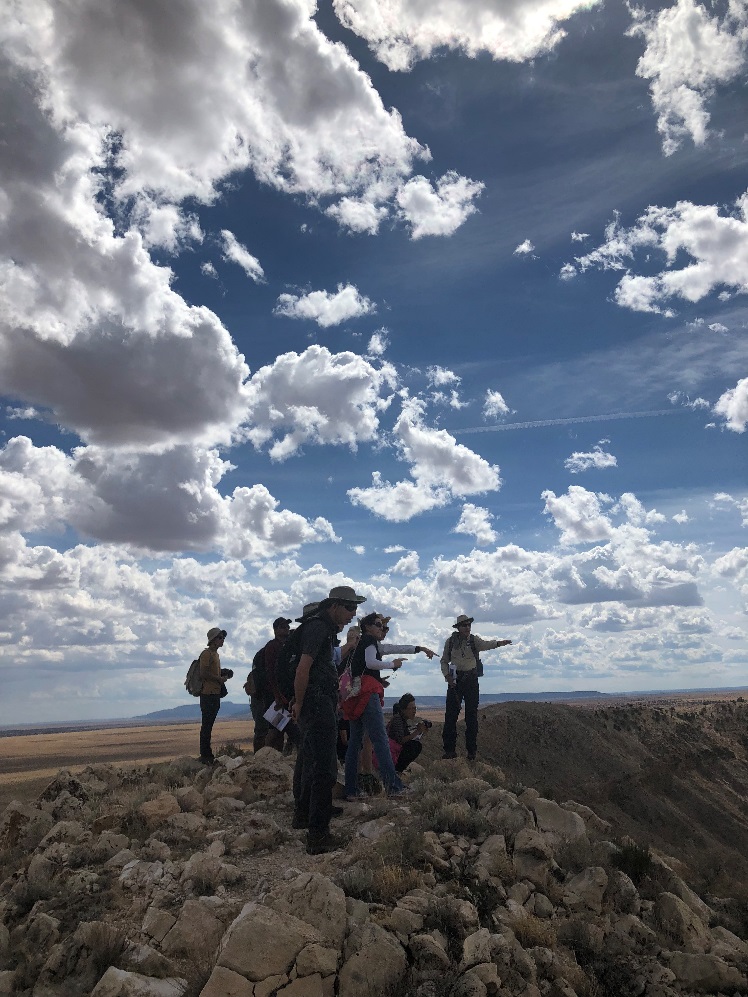 Before those discussions kicked off, conference participants made a trip to Meteor Crater, Arizona. The group had an opportunity to see first hand how astronomical and geological forces can shape a planetary surface. The excursion provided ample opportunity to discuss the nature of impacting objects, crater excavation processes, the development of ejecta blankets, and some of the environmental effects of impact events, both large and small. Importantly, the group also had an opportunity to see the types of geologic samples available around an impact crater and discuss how we can use the characteristics of related lunar samples to better infer their provenance. The group made good use of the second edition of the LPI’s award-winning Guidebook to the Geology of Barringer Meteorite Crater, Arizona (a.k.a. Meteor Crater).

Back in Flagstaff, the meeting was launched by a fascinating presentation by Kate Su (University of Arizona), who spoke about astronomical observations of debris disks that provide insights to the types of bombardment that occur around young stars. That was the first of a series of oral sessions that explored the first billion years of a planetary system’s history. “Astronomical Observations” of collisions in exoplanetary systems provided a potential snapshot of the types of events that affected our own solar system. “Geochemical, Geological, and Petrological Observations” used analyses of the rock record to extract clues about the last phase of accretion and the latest portion of a subsequent period of bombardment. “Ages of Impacts Part I and Part II” presented geochronologic and geological data used to determine the absolute and relative timing of impacts during the (lunar) basin-forming epoch. Discussion was led by session chairs David Kring (LPI), Timmons Erickson (NASA Johnson Space Center), and Richard Walker (University of Maryland). To ensure important constraints were not overlooked, a broadly-themed “Solar System Bombardment” poster session examined bombardment processes across the solar system.

Those data-rich sessions were followed by “Developing Models Consistent with the Data,” which not only drew on existing data, but also provided hints of future work. That set the stage for the session “Future Tests,” which recognized that the new NASA Lunar Exploration Campaign will provide opportunities to test several of the hypotheses being discussed. That discussion was guided by chairs Heather Meyer (LPI) and Gregory Neumann (NASA Goddard Space Flight Center).

Those sessions revealed three fault lines in the community:  (1) argon-argon lunar impact ages and their implications for early solar system bombardment are often misunderstood; (2) It is unclear if the size frequency distribution (SFD) of surface craters can be integrated with subsurface gravity signatures of additional craters to obtain a revised SFD of impactors; and (3) the geological and lithological products of impact-cratering processes on the Moon are apparently mysterious, not only in an exciting way ripe with discovery, but also in a disappointing way reflective of confusion. That latter point is a reminder that the planetary science field has drifted far from the talents of those involved in Apollo. If we are going to press forward with new lunar and planetary surface operations, training programs like those at Meteor Crater will be essential for safe and productive missions.

Conference attendees then turned their attention to related topics:  “The Early Earth Record,” “The Last Billion Years,” and “Bombardment and Implications for Habitability,” guided by chairs Simone Marchi (Southwest Research Institute), David Minton (Purdue University), and Nicole Zellner (Albion College). A wonderfully engaging closing presentation was provided by Penelope Boston (Director, NASA Astrobiology Institute), who drew out the biological threads in the meeting and provided an inspired transition to the Habitability conference, which is the next (and final) installment in LPI’s First Billion Years initiative. For those interested in the conference finale, make plans for visiting Wyoming and Montana September 8–12, 2019. The meeting will begin with a one-day excursion to Yellowstone National Park to explore the biologic potential of hydrothermal systems in volcanic settings and to spark discussion of a similar potential in impact-generated hydrothermal systems that may have existed during the dawn of life nearly 4 billion years ago. The field trip will be followed by presentations and discussion of planetary habitability, the production of conditions conducive to life, the emergence of life on Earth, the potential for abiogenesis on other solar system bodies, and extensions to extrasolar systems.

For more information, including links to the program and abstracts, visit the meeting website at https://www.hou.usra.edu/meetings/bombardment2018/.