The Nearside of the Moon May Still Be Tectonically Active 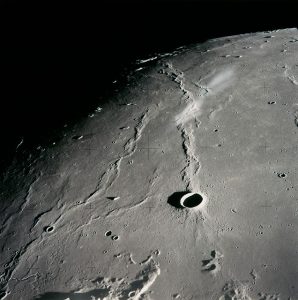 While the Moon is often considered to have been tectonically dead for billions of years, new results from researchers at the University of Bern and Brown University have found evidence for recent tectonic activity that is not connected to any known sources of deformation. These “active nearside tectonic systems,” while young, may actually be the reactivation of one of the Moon’s most ancient and influential events.

The results, published in Geology, focused on a classical example of lunar geology:  wrinkle ridges, formed as the basaltic crust of a lunar maria is forced together due to contraction. These ridges are a common occurrence in the maria, which were formed by multiple thin flows of basalt. In particular, they have been observed to form in response to the formation of “mascons,” areas where the lunar crust has been heavily loaded in response to impact processes. Most of these features were expected to have formed in the distant past.

The lunar surface is constantly bombarded by micrometeorites. These tiny impacts will slowly erode and round off the shape of any new, angular features. The appearance of blocky, angular boulders near tectonic features is thus a common way to indicate their youth. The authors used high-resolution Lunar Reconnaissance Orbiter images to identify numerous areas where these angular boulders were found on top of the wrinkle ridges themselves, showing that they formed in the recent geologic past.

Four major explanations have been advanced for recent tectonic deformation of the Moon:  loading on mascons, despinning, global cooling and contraction, and daily tides. The authors were able to rule out all these forces as likely contributors to these new wrinkle ridges. Instead, it is more likely to be a reactivation of faults left by the formation of the South Pole-Aitken basin. This impact, which occurred 4.3 billion years ago, caused such immense transient stress as to fracture the crust on the opposite (antipodal) side that it formed. The expected stresses line up well with the distribution of these active nearside tectonic systems. Because these faults expose relatively fresh bedrock, the authors argue that they should be a key target for future lunar exploration to understand its geologic history.