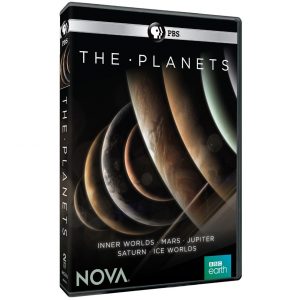 Among the stars in the night sky wander the worlds of our own solar system, each home to truly awe-inspiring sights:  a volcano three times as tall as Mount Everest, geysers erupting with icy plumes, a cyclone larger than Earth that’s been churning for hundreds of years. In this five-part series, NOVA explores the awesome beauty of The Planets. With special effects and extraordinary footage captured by orbiters, landers, and rovers, you’ll get an up-close look at Saturn’s 45,000-mile-wide rings, Mars’ towering ancient waterfalls, and Neptune’s supersonic winds. Scientists share the inside story of the missions that revealed everything from methane lakes on a distant moon to the mysterious unfrozen sea in Pluto’s heart. Along the way, NOVA reveals how each of these spectacular worlds has shaped our own planet:  Earth.