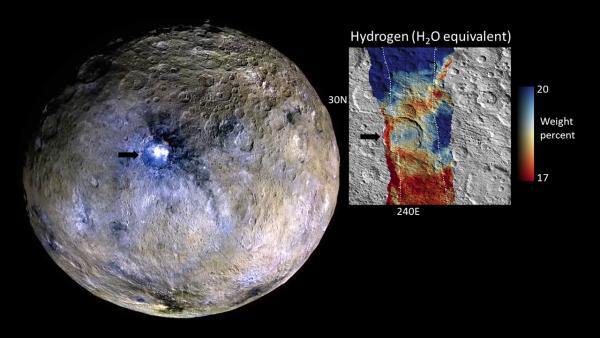 The study focused on Occator Crater (left), which contains Ceres’ most prominent bright spots. The newly reported map (right) reveals higher concentrations of hydrogen than expected if the near sub-surface within Occator Crater and its ejecta blanket was ice-free. Results indicate that the crustal materials excavated by the crater-forming impact were rich in water ice. Credit: NASA/JPL-CalTech/UCLA/MPS/DLR/IDA; Prettyman et al. (2021).

Anomalies in the distribution of hydrogen at Occator Crater on the dwarf planet Ceres reveal an icy crust, says a new study led by Tom Prettyman, a senior scientist at the Planetary Science Institute (PSI).

The evidence comes from data acquired by the Gamma Ray and Neutron Detector (GRaND) onboard NASA’s Dawn spacecraft. A detailed map of the concentration of hydrogen in the vicinity of Occator was derived from observations from elliptical orbits that brought the spacecraft very close to the surface during the final mission phase, said Prettyman. The paper, entitled “Replenishment of near-surface water ice by impacts into Ceres’ volatile-rich crust: Observations by Dawn’s Gamma Ray and Neutron Detector,” appears in Geophysical Research Letters. PSI scientists Yuki Yamashita, Norbert Schorghofer, Carle Pieters, and Hanna Sizemore are co-authors.

GRaND’s neutron spectrometer found elevated hydrogen concentrations in the outermost 1 meter (3.2 feet) of the surface of Occator, a large, young crater 92 kilometers (57 miles) in diameter, the paper says. The paper argues that the excess hydrogen is in the form of water ice. Results confirm Ceres’ outer crust is ice-rich and that water ice can survive within impact ejecta on airless, icy bodies. The data imply partial control of the distribution of near-surface ice by large impacts and provide constraints on surface age and regolith thermophysical properties.

“We think that ice has survived in the shallow subsurface during the roughly 20 million years following the formation of Occator. Similarities between the global distribution of hydrogen and the pattern of large craters suggest impact processes have delivered ice to the surface elsewhere on Ceres. This process is accompanied by the loss of ice by sublimation caused by heating of the surface by sunlight,” Prettyman said.

“The impact that formed Occator would have excavated crustal materials as deep as 10 kilometers (about 6 miles). So, observed enhancements in the concentration of hydrogen within the crater and ejecta blanket support our interpretation that the crust is ice rich. The findings reinforce the emerging consensus that Ceres is a differentiated body in which ice separated from rock to form an icy outer shell and subcrustal ocean,” Prettyman said.

“Smaller, water-rich bodies, including the parent bodies of the carbonaceous chondrite meteorites, may not have experienced differentiation. So, the findings could have implications for the evolution of icy bodies, small and large,” Prettyman said. “More broadly, as an ocean world, Ceres could be habitable and is therefore an attractive target for future missions.”

Funding for the study was provided by a grant from NASA’s Discovery Data Analysis Program, the NASA Dawn Mission, and the SSERVI TREX project.