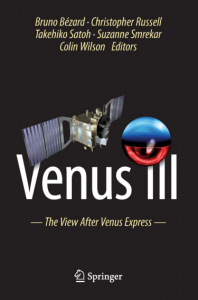 The Venus Express spacecraft, which was launched in November 2005 and ceased activity in December 2014, has brought about a new wealth of data on Venus’ atmosphere, surface, and space environment. Following the completion of this landmark mission, an overview of the current state of scientific understanding of Venus has been assembled into a single collection. The 10 papers in this book, written by an international team of specialists, are the products of this effort. They review our knowledge of Venus’ interior structure, surface composition, and atmosphere in terms of thermal structure, dynamics, composition, chemistry, clouds, aeronomy, and interaction with the solar wind. Additionally, they identify the questions and measurements that remain open for study in ongoing and future research and exploration efforts. The resulting volume is primarily intended for students and researchers of planetary science. This book is a follow-up to the pioneering book Venus, published in 1983, and its successor volume Venus II, published in 1997, both of which stood at their respective times as the most authoritative single-volume works available on the planet.