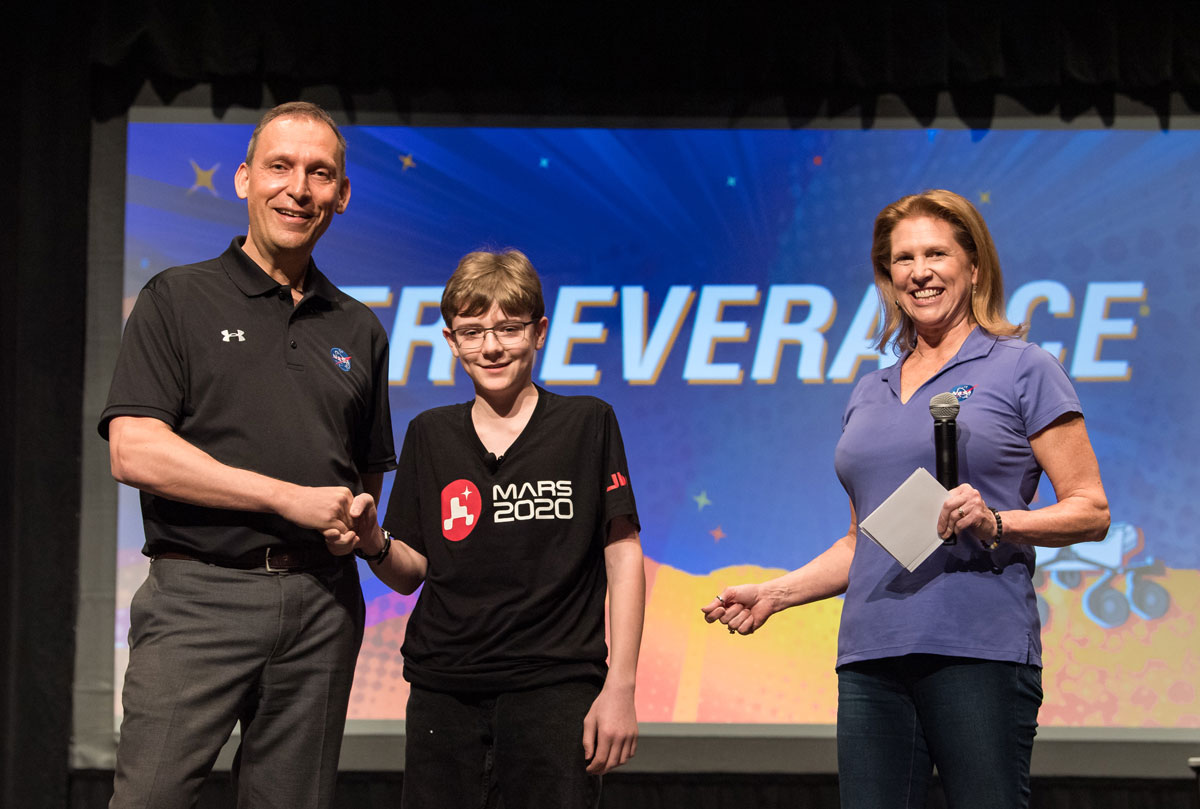 NASA’s next Mars rover has a new name – Perseverance.

The name was announced on March 5, 2020 by Thomas Zurbuchen, associate administrator of the Science Mission Directorate, during a celebration at Lake Braddock Secondary School in Burke, Virginia. Zurbuchen was at the school to congratulate seventh grader Alexander Mather, who submitted the winning entry to the agency’s “Name the Rover” essay contest, which received 28,000 entries from K-12 students from every U.S. state and territory.

“Alex’s entry captured the spirit of exploration,” said Zurbuchen. “Like every exploration mission before, our rover is going to face challenges, and it’s going to make amazing discoveries. It’s already surmounted many obstacles to get us to the point where we are today – processing for launch. Alex and his classmates are the Artemis Generation, and they’re going to be taking the next steps into space that lead to Mars. That inspiring work will always require perseverance. We can’t wait to see that nameplate on Mars.”

Perseverance is the latest in a long line of Red Planet rovers to be named by school-age children, from Sojourner in 1997 to the Spirit and Opportunity rovers, which landed on Mars in 2004, to Curiosity, which has been exploring Mars since 2012. In each case, the name was selected following a nationwide contest.

The contest that resulted in Alex’s winning entry of Perseverance began August 28, 2019. Nearly 4,700 volunteer judges – educators, professionals and space enthusiasts from around the country – reviewed submissions to help narrow the pool down to 155 semifinalists. Once that group was whittled down to nine finalists, the public had five days to weigh in on their favorites, logging more than 770,000 votes online, with the results submitted to NASA for consideration. The nine finalists also talked with a panel of experts, including Lori Glaze, director of NASA’s Planetary Science Division; NASA astronaut Jessica Watkins; rover driver Nick Wiltsie at NASA’s Jet Propulsion Laboratory (JPL) in Pasadena, California; and Clara Ma, who, as a sixth grade student in 2009, named Curiosity.

For more information about the mission, go to: https://mars.nasa.gov/mars2020/.