Volcanoes on Mars Could Be Active, Raising the Possibility of Recent Habitable Conditions 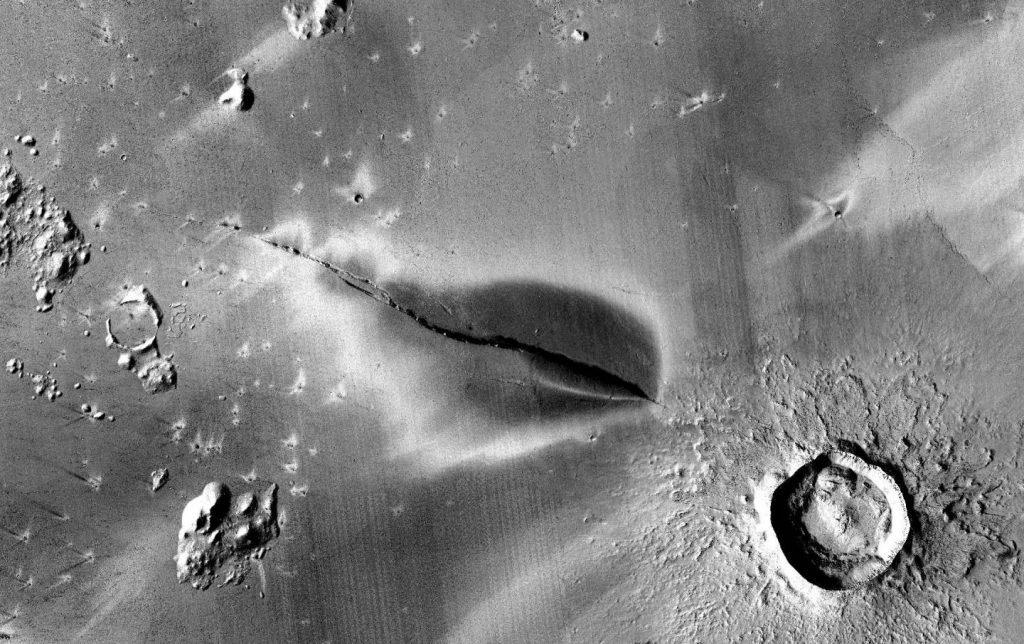 Evidence of recent volcanic activity on Mars shows that eruptions could have taken place within the past 50,000 years, says a paper by Planetary Science Institute Research Scientist David Horvath.

Most volcanism on the Red Planet occurred between 3 and 4 billion years ago, with smaller eruptions in isolated locales continuing perhaps as recently as 3 million years ago. But, until now, there was no evidence to indicate whether Mars could still be volcanically active.

Using data from satellites orbiting Mars, the research team found evidence of an eruption in a region called Elysium Planitia that would be the youngest known volcanic eruption on Mars, said Horvath, lead author on “Evidence for geologically recent explosive volcanism in Elysium Planitia, Mars” that appears in the September 2021 issue of Icarus.

“This feature is a mysterious dark deposit, covering an area slightly larger than Washington, DC. It has a high thermal inertia, includes high‑calcium pyroxene-rich material, and is distributed symmetrically around a segment of the Cerberus Fossae fissure system in Elysium Planitia, atypical of aeolian, or wind-driven, deposits in the region. This feature is similar to dark spots on the Moon and Mercury suggested to be explosive volcanic eruptions,” Horvath said. “This may be the youngest volcanic deposit yet documented on Mars. If we were to compress Mars geologic history into a single day, this would have occurred in the very last second.”

The majority of volcanism in the Elysium Planitia region and elsewhere on Mars consists of lava flowing at the surface, though there are numerous examples of explosive volcanism on Mars. However, this deposit appears to be different. “This feature overlies the surrounding lava flows and appears to be a relatively fresh deposit of ash and rock, representing a different style and time period of eruption than previously identified pyroclastic features,” Horvath said. “This eruption could have spewed ash as high as 10 kilometers into the martian atmosphere, but likely represents a last gasp of erupted material. Elysium Planitia hosts some of the youngest volcanism on Mars, dating around 3 million years ago, so it is not entirely unexpected. It is possible that these sorts of deposits were more common but have been eroded or buried.”

The site of the recent eruption is about 1600 kilometers (1000 miles) from NASA’s InSight lander, which has been studying tectonic activity on Mars since 2018. Two marsquakes have been localized to the region around the Cerberus Fossae, and recent work has suggested the possibility that these could be due to the movement of magma at depth.

“The young age of this deposit absolutely raises the possibility that there could still be volcanic activity on Mars, and it is intriguing that recent marsquakes detected by the InSight mission are sourced from the Cerberus Fossae,” Horvath said. “However, sustaining magma near the surface of Mars so late in Mars history with no associated lava flows would be difficult, and thus a deeper magmatic source would likely be required to create this eruption.”

A volcanic deposit such as this also raises the possibility for habitable conditions in the near-surface of Mars in recent history, says Horvath. “The interaction of ascending magma and the icy substrate of this region could have provided favorable conditions for microbial life fairly recently and raises the possibility of extant life in this region.”

Horvath’s work on the research took place when he was a postdoctoral researcher at the University of Arizona’s Lunar and Planetary Laboratory. He is now a Research Scientist at the Planetary Science Institute.