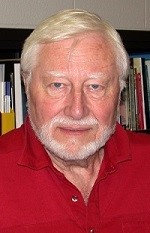 Emeritus Professor William A. Cassidy of the Department of Geology and Environmental Science at the University of Pittsburgh passed away on March 22, 2020. Cassidy is best known for creating the Antarctic Search for Meteorites (ANSMET) program in 1976, serving as its Principal Investigator for nearly 20 years.

Cassidy, a World War II veteran and Fulbright scholar, graduated from the University of New Mexico with a B.S. in geology and from Penn State University with a Ph.D. in geochemistry. He was very adventurous and loved to travel to strange places. After graduating from New Mexico, he gave himself a graduation present by attempting to drive a motorcycle the entire length of the Pan-American highway, which in places was little more than a cow path.

Cassidy was an expert in the geology of meteorite impact craters and traveled to many places in the world to study them, including Canada, South America, Africa, and Australia. He spent several summers in Argentina in the Campo del Cielo crater field, excavating a chain of impact craters that were made when a giant iron meteorite broke up in mid-air.

When he heard that a Japanese meteorologist had discovered some meteorites on a glacier in Antarctica, Cassidy realized that the thick, moving ice would be a natural collector and concentrator of meteorites. This realization led to the creation of ANSMET, and for many years, Cassidy led expeditions to Antarctica, discovering enough meteorites — including several from the Moon and Mars — to triple the world’s collection. Because of those efforts, the Cassidy Glacier in Antarctica was named for him, as well as the mineral cassidyite and the asteroid 3382 Cassidy. In 1979, he was awarded the Antarctica Service Medal. His efforts in Antarctica were documented in his memoir, Meteorites, Ice, and Antarctica:  A Personal Account, published by Cambridge University Press in 2003.

Portions of text courtesy of the University of Pittsburgh