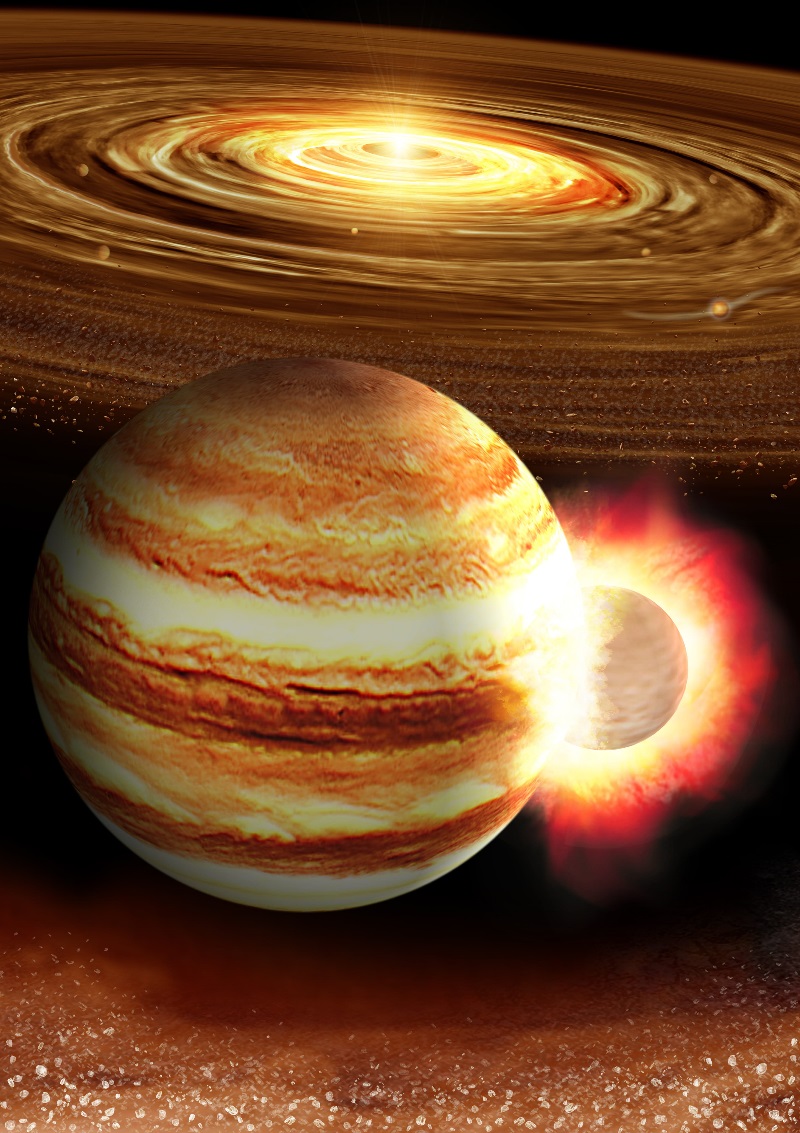 In this artist’s rendition, a massive, young protoplanet collides with Jupiter during the formation of the solar system. The massive shock of this impact redistributed material within Jupiter’s core, leaving it less dense than expected when measured by the Juno probe. Credit: Illustration by K. Suda and Y. Akimoto/Mabuchi Design Office, courtesy of Astrobiology Center, Japan.

A colossal, head-on collision between Jupiter and a still-forming planet in the early solar system, about 4.5 billion years ago, could explain surprising readings from NASA’s Juno spacecraft, according to a study this week in the journal Nature.

“This is puzzling,” said Rice astronomer and study co-author Andrea Isella. “It suggests that something happened that stirred up the core, and that’s where the giant impact comes into play.”

Isella said leading theories of planet formation suggest Jupiter began as a dense, rocky or icy planet that later gathered its thick atmosphere from the primordial disk of gas and dust that birthed our sun.

Isella said he was skeptical when study lead author Shang-Fei Liu first suggested the idea that the data could be explained by a giant impact that stirred Jupiter’s core, mixing the dense contents of its core with less dense layers above. Liu, a former postdoctoral researcher in Isella’s group, is now a member of the faculty at Sun Yat-sen in Zhuhai, China.

“It sounded very unlikely to me,” Isella recalled, “like a one-in-a-trillion probability. But Shang-Fei convinced me, by shear calculation, that this was not so improbable.”

The research team ran thousands of computer simulations and found that a fast-growing Jupiter can have perturbed the orbits of nearby “planetary embryos,” protoplanets that were in the early stages of planet formation.

Liu said the calculations included estimates of the probability of collisions under different scenarios and distribution of impact angles. In all cases, Liu and colleagues found there was at least a 40% chance that Jupiter would swallow a planetary embryo within its first few million years. In addition, Jupiter mass-produced “strong gravitational focusing” that made head-on collisions more common than grazing ones.

“Because it’s dense, and it comes in with a lot of energy, the impactor would be like a bullet that goes through the atmosphere and hits the core head-on,” Isella said. “Before impact, you have a very dense core, surrounded by atmosphere. The head-on impact spreads things out, diluting the core.”

Impacts at a grazing angle could result in the impacting planet becoming gravitationally trapped and gradually sinking into Jupiter’s core, and Liu said smaller planetary embryos about as massive as Earth would disintegrate in Jupiter’s thick atmosphere.

“The only scenario that resulted in a core-density profile similar to what Juno measures today is a head-on impact with a planetary embryo about 10× more massive than Earth,” Liu said.

Isella said the calculations suggest that even if this impact happened 4.5 billion years ago, “it could still take many, many billions of years for the heavy material to settle back down into a dense core under the circumstances suggested by the paper.”

The Juno mission was designed to help scientists better understand Jupiter’s origin and evolution. The spacecraft, which launched in 2011, carries instruments to map Jupiter’s gravitational and magnetic fields and probe the planet’s deep, internal structure.

For more information on the Juno mission, visit: https://www.jpl.nasa.gov/missions/juno/.