Left: Most of the impact melt in Larmor Q crater is located opposite the largest slumped materials, where melt splashed up on the south wall as a result of the north wall's collapse. Image: LROC NAC M174081337 (NASA/ GSFC/ASU).

Where Next?
The Moon, our nearest neighbor, is a captivating destination for future study and exploration. New missions to the Moon are planned using high-resolution images and topography. 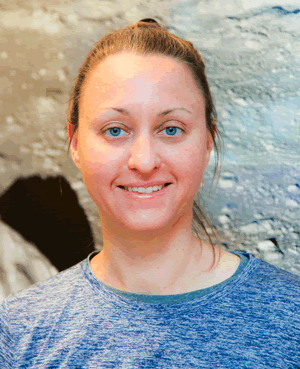 Dr. Julie Stopar, a scientist at Lunar and Planetary Institute, researches many fascinating lunar impact craters and volcanoes. She has been active in the science and operations of the Lunar Reconnaissance Orbiter Camera since before the spacecraft launched in 2009. One of the primary objectives of the mission is to collect the data necessary to plan future exploration of the Moon's surface.