Water in the Moon

Is the Moon completely dry? Lunar water was not detected during the Apollo era, but new analytical techniques discovered water in once-molten samples of the vast lunar interior. We now wonder when that water was delivered, and what its source was.

Volcanic samples collected by Apollo astronauts contained the first detectable traces of water and are revolutionizing our understanding of the Moon's water cycle. Orange glassy beads that were produced from lava droplets erupted in fire fountains suggest that the interior of the Moon hosts water abundances that may, in some regions, be comparable to that in portions of Earth's mantle.

How did water get inside the Moon? There are two endmember scenarios: (a) either water was accreted with Moon-forming material following the event that created the Moon (early, circa 4.5 billion years ago), or (b) water was delivered to the Moon's interior at a later time by water-rich planetary objects (late, up to circa 4.3 billion years ago).

The potential sources of water include asteroids and comets that have impacted the surface. A range of water abundances in those types of objects has been derived from analyses of meteoritic samples of asteroids and from spacecraft missions to comets. Each of those potential sources also has a unique isotopic composition that can be used to fingerprint the origin of the Moon's water.

The isotopic composition of water in several types of carbonaceous chondrites from asteroids (shown in the blue area) suggest they are the most likely source of water in the Moon's interior and therefore the source of water delivered to Earth at the same time. A rare type of comet could potentially produce the same hydrogen isotopic fingerprint (in the blue area), but would not produce the required nitrogen isotopic signature (not shown). The exotic compositions of comets from the Oort cloud and Kuiper belt, plus some asteroids, indicate they delivered only a small amount (<20%) of volatiles to the Moon's interior. 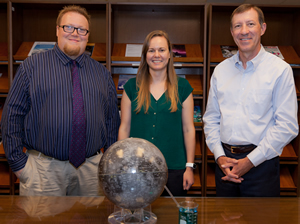 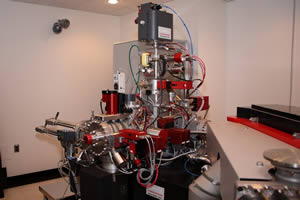 Dr. Jessica Barnes is the lead author of a study that tracked down the source of the water in the Moon's interior. She conducted that project with LPI's Dr. David Kring, team leader of the LPI-JSC Center for Lunar Science and Exploration. Barnes is continuing to pursue these types of science conundrums with Dr. Francis McCubbin as an LPI postdoctoral researcher using the Cameca NanoSIMS 50L ion probe at NASA's Johnson Space Center.