Structure and Evolution of Planetary Volcanoes

On October 15, 2006, two earthquakes shook the northwest coast of the island of Hawaii 6 minutes apart: the magnitude 6.7 Kiholo Bay event and the shallower but still unexpectedly deep magnitude 6.0 Mahukona event (see map). Their close proximity in space and time suggested a common origin, but sharp contrasts in mechanism and depth present an unusual fault/aftershock relationship. McGovern (2007) hypothesized that these "fraternal twin" earthquakes are the divergent outcomes of a single process: downward flexing of the lithosphere in response to loading by the Hawaiian volcanos Hualalai and Kohala. Hi-res image

Finite element models of volcanic loading show that the initial Kiholo Bay event can be attributed to a high-stress zone in the lower lithosphere. Hi-res image

However, an explanation for the depth (also within the mantle) of the Mahukona event requires models that incorporate a strong stiffness contrast between crust and mantle in order to produce peak upper lithosphere stresses at the top of the stiffer mantle's. This compressional high-stress zone also traps magma near the base of the crust, thereby explaining the seismically observed thickening from below (underplating) of Hawaiian volcanos. Hi-res image

A color map of topography of the island of Oahu and bathymetry of the submarine Nuuanu slide, identifying potential analogs to structures in the Olympus Mons aureole (black and white images further below).

The prominent Tuscaloosa Seamount (label 1 in color bathymetry) has dimensions very similar to large blocks in the north lobe of the Olympus Mons aureole (image b, label 1).

A close-up of the block shows lineations that resemble the raised margins of lava flows on the Olympus Mons edifice, thereby establishing a link between the block and the edifice that strongly points to a large landslide origin for the aureole lobes.
Hi-res image

A topographic rendering of the massive north aureole lobe of Olympus Mons is flanked by similar renderings for Hawaiian volcanos: the submarine Nuuanu slide north of Oahu (left) and the Hilina slump of the south flank of Kilauea volcano on the big island of Hawaii (right). The insets in the central figure show the Hawaiian examples at the same scale as Olympus Mons. The Olympus Mons north aureole is about 30 times the volume of the Nuuanu slide, comparable to the volume difference between the Olympus Mons main edifice and a Hawaiian island. However, note that the sizes of individual aureole blocks are similar to those constituting the Hawaiian landslides, suggesting that the planet-independent strength of basaltic rocks plays a role in determining block size.
Hi-res image

Olympus Mons, the tallest volcano in the solar system at 23 km from base to summit, is located on the flank of the immense Tharsis Rise on Mars. The Olympus Mons edifice spreads outward on a deep detachment, likely rooted in phyllosilicate (clay) sediments produced in abundance in early martian history. As at Hawaii, spreading creates deformation and failure of the volcano flanks: a close-up of the eastern flank and basal escarpment of Olympus Mons shows a partially failed segment bounded by extensional faults at the top (white arrows) and compressional faults at the bottom (black arrows). If this segment were to fail completely, the resulting landslide deposit would be comparable to the volume of the aureole lobe directly east. The very young ages of local lava flows, channels (possibly water-carved), and flank deformations (less than 40 million years) suggest the existence of a warm, wet, and chemically rich subsurface environment up to the present day, making the Olympus Mons east flank a compelling astrobiological target. Hi-res image 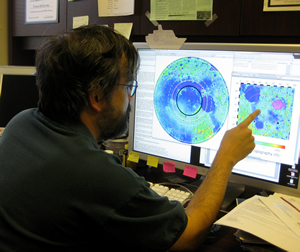 Dr. Patrick McGovern's research has focused on the structure and evolution of large volcanic edifices and provinces on the terrestrial planets.

He approaches these problems from a quantitative mechanical perspective, calculating the immense stresses that build up in the lithosphere (mechanically strong outer layer of a planet) as a result of loads from the surface (the large volcanos themselves), the subsurface (buoyant crustal underplating and mantle plumes), and within the lithosphere (inflation of magma chambers).

He compares the predictions of such models to observations from imaging, topography, gravity, and spectroscopy datasets, in order to constrain the conditions (such as lithospheric thickness, magmatic supply rate, loading history, and magma chamber dimensions) that controlled the formation of a volcano.